NASA Mars Rover gets smarter as it ages

by Mihai Andrei
in Physics, Space
Reading Time: 2 mins read
A A
Share on FacebookShare on TwitterSubmit to Reddit 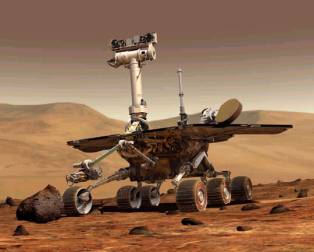 NASA’s Mars Exploration Rover Opportunity is already in its 7th year on Mars, and over the years it provided some quite useful information; researchers from NASA have been constantly working on ways to improve and optimize it by constantly uploading new software.

Such is the case with the software they applied this winter, which makes it able to make its own choices about whether rocks are worth the effort of gathering additional information or not. Basically, the machine looks at a rock and sees if it meets the required criteria, such as colour or rounded shape.

And she should know, as she’s a rover driver and senior developer of the software system.

“It found exactly the target we would want it to find,” Estlin said. “This checkout went just as we had planned, thanks to many people’s work, but it’s still amazing to see Opportunity performing a new autonomous activity after more than six years on Mars. We spent years developing this capability on research rovers in the Mars Yard here at JPL,” she adds. “Six years ago, we never expected that we would get a chance to use it on Opportunity.”

You can get online updates from the Mars Rover here, and more information about AEGIS here