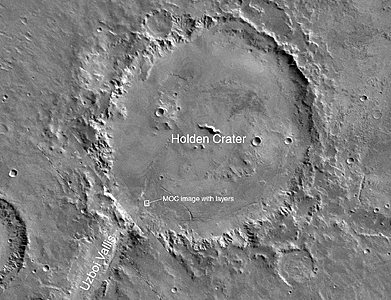 Mars has fueled many speculations for many centuries, and just several decades ago it was proved that there is no macromolecular life there. But still, there are numerous phenomenae that make it resemble Earth, such as avalanches.

Whatsmore, recently scientists studying images from The University of Arizona found never-before-seen impact “megabreccia” and a possibly once-habitable ancient lake on Mars at a place called Holden crater. The megabreccia is topped by some layers of fine sediments which were form in what scientists believe to be a long-lived, calm lake that filled Holden crater on early Mars.

“Holden crater has some of the best-exposed lake deposits and ancient megabreccia known on Mars,” said HiRISE’s principal investigator, professor Alfred McEwen of the UA’s Lunar and Planetary Laboratory. “Both contain minerals that formed in the presence of water and mark potentially habitable environments. This would be an excellent place to send a rover or sample-return mission to make major advances in understanding if Mars supported life.”

The Holden crater has been subject to study for astronomers for years, its structure being very interesting because it is a crater that formed within an older, multi-ringed impact basin called Holden basin. Before the impact created the crater, large channels crossed and deposited sediments in Holden basin. But what’s really fascinating is that on top of these sediments they found clay, which can only be formed in the presence of water.

“The origin of the clays is uncertain, but clays in the probable lake sediments implies quiescent conditions that may preserve signatures of a past habitable environment,” HiRISE co-investigator John Grant of the Smithsonian National Air and Space Museum said. “If we were looking on Earth for an environment that preserves signatures related to habitability, this is one of the kinds of environments we would look at.”

But even this discovery was topped by another thing: they found ayers of great boulder-filled debris unleashed later, when water breached Holden crater rim, creating a torrential flood that eroded the older lake sediments.

“The volume of water that poured through during this flood must have been spectacular,” Grant said. “It ripped up finely bedded materials, including blocks 70 meters or 80 meters across — blocks nearly the size of football fields.”