Although Curiosity landed recently on Mars, the rover is already proving its usefulness, beaming back all sort of interesting information; this time, Curiosity has snapped photos of rocky outcroppings which seem to be stream beds where water once flew on the Red Planet. 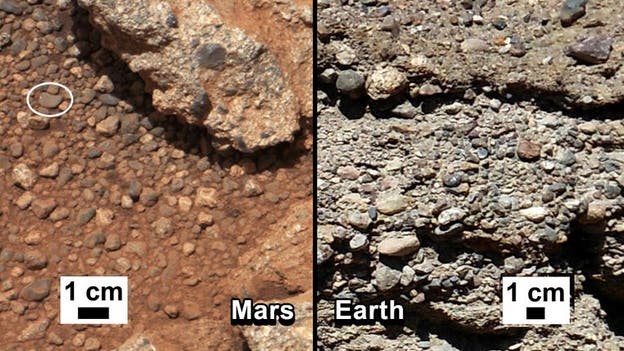 The rock is quite eroded and it consists of rounded gravel consolidated in a sandy matrix, the entire thing looking much like broken slabs of cement sidewalk. Some of the smooth pebbles have fallen into a pile, something we often see here on Earth too. After analyzing the pictures, scientists were clear:

“This is a rock that was formed in the presence of water,” says John Grotzinger, project scientist for the mission at the California Institute of Technology.

Also, it’s not just any water, but flowing water. But how could they have known? Well, it’s not really that hard. The two main indicators here are the rounded pebbles and the cemented sandstones: they look just like the ones found on earth in streams or down in small canyons.

“These are all telling us that there was water really flowing across the surface there, and probably pretty deep water — ankle-deep, knee-deep water — like you’d have in an occasional desert flood on the Earth, in the Southwest, for example.”

In order to become this round, pebbles were subject to some sort of erosion, and considering how big and heavy they are, it’s practically impossible to be rounded by wind, so that only leaves one culprit: water. This is consistent with previous research, which also claimed there was water on Mars, but the evidence was somewhat indirect, and while convincing, not completely reliable.

“Before, we never really saw a rock on Mars where we could tell whether it was wind or water that was doing the transport,” Peter Doran, University of Illinois at Chicago says. “And now we have a clear sign of flowing water on Mars and we can get estimates of the size of the flow and so on. It’s really fascinating.”

This is also the first evidence of flowing water, as opposed to occasional groundwater that occasionally bubbles up, which is very important, because water is vital for life as we know it; it’s not yet clear how flowing water changes the picture, but exobiologists are thrilled by the prospects.

“Something happened on Mars that simply doesn’t happen today,” Andrew Knoll, a planetary sciences professor at Harvard University, says. “And that is, there was water flowing at high rates over the Martian surface. That’s really what they’ve found.”