In a new monumental find, Curiosity data readings suggest that radiation levels on the surface of Mars are very much similar to those in sub-orbital Earth. This means that astronauts or marsonauts can indeed set foot on the red planet, albeit for a limited amount of time.

The findings came after the Curiosity rover, still only three months into its two year-long mission, beamed back the initial radiation measurements from the Martian surface.

“Absolutely, astronauts can live in this environment,” Don Hassler, of the Southwest Research Institute in Boulder, Colo., told reporters during a news conference Thursday. 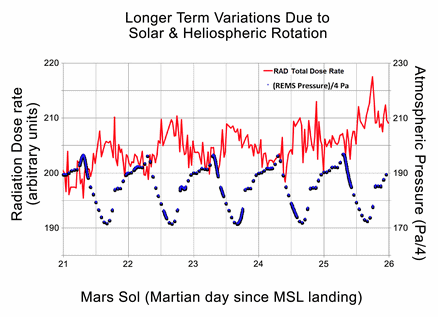 Curiosity used the Radiation Assessment Detector or RAD, one of its 10 high-end instruments, to assess the radiation levels, which have been found to be safe for humans. This, despite Mars’ atmosphere is only 1% as thick as that of our planet. Also, Mars doesn’t have a magnetic field.

“We see a definite pattern related to the daily thermal tides of the atmosphere. The atmosphere provides a level of shielding, and so charged-particle radiation is less when the atmosphere is thicker. Overall, Mars’ atmosphere reduces the radiation dose compared to what we saw during the flight to Mars.” said Hassler.

It’s worth noting that this has been the first time ever radiation has been measured on the surface of a planet, besides Earth.

Still, these are only the preliminary measurements and more data is needed for a full conclusion to be drawn. Curiosity has yet to be exposed to the effects of big solar storms that reach Mars, and this isn’t an issue that should be taken lightly. Curiosity experienced such a solar storm cloud on its way to Mars in deep-space.

“If we can find out more about the weather and climate on present-day Mars, then that really helps us to improve our understanding of Mars’ atmospheric processes,” said Claire Newman of Ashima Research in Pasadena, Calif., a collaborator for Curiosity’s Rover Environmental Monitoring Station instrument. “That gives us much more confidence when we try to predict things like what Mars may have looked like in the past.”