Curiosity drills Martian rock in most complicated maneuver yet 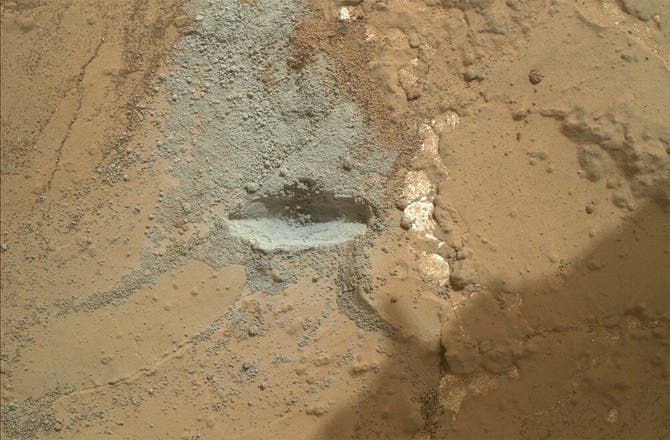 Recently, Curiosity rover made its most complex maneuver since it landed on Mars after it drilled a promising rock, offering scientists with invaluable geological information otherwise inaccessible. This is the first time a robot has carried out a drilling operation on another planet, and the last important check in Curiosity’s scientific arsenal, signaling all the rover’s instruments are up and running, ready for full swing.

The rover positioned itself in front of a pristine rocky formation a few days earlier, preparing its instruments and surveying the area for the most promising drill spots. The Alpha Particle X-Ray Spectrometer (APXS) instrument mounted on Curiosity proved to be invaluable in this respect, since it was used to scan for drill targets.

“Drilling into a rock to collect a sample will be this mission’s most challenging activity since the landing. It has never been done on Mars,” said project manager Richard Cook, of NASA’s Jet Propulsion Laboratory in Pasadena, Calif., in a statement during a January press conferencewhen the drilling operation was being planned.

Recent images of the region targeted for drilling allowed NASA to confirm its potential for evidence of past and present water, which in turn might rend evidence of past life as well – Curiosity’s main mission. Previously, the rover analyzed soil samples and found complex chemistry within it – water, sulfur and chlorine-containing substances, among other ingredients.

In this first drill run, just recently made, the rover’s instrument was set to percussion mode, easily and steadily hammering the rock until a short two inch probe was made.  Then powdered samples of rock dust are fed into its Mars Science Laboratory. “The drilling has got to be done carefully. We are still in checkout mode and the drill is the last instrument of Curiosity’s ten science instruments to be fully checked out,” Green said.

This preliminary drilling has taught the Curiosity team a lot, as the outcrop they’re currently studying is riddled with calcium sulfate veins, a sign that the “Yellowknife Bay” area the rover is currently surveying once played host to persistent water. We’ll keep you posted with more news from Curiosity.