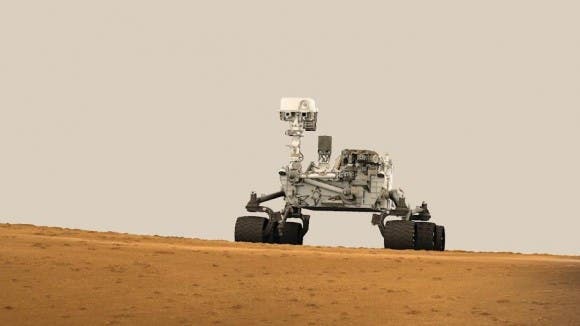 The Mars Curiosity rover is preparing to use its drilling tool for the first time, however as preparations for the operation are being carefully made, NASA engineers are frightened that a potential malfunction of the boring drill might cause an entire electrical disaster. This might mean that the entire rover could get irrecoverably fried.

The issue lies with a bond in the drilling mechanism which is particularly subjected to fail. If this happens, an electrical short could threaten to knock out the entire rover.

“Unless you do something about it, all hell breaks loose electronically, because it takes our power bus and rattles it around,” Curiosity chief engineer Rob Manning, of NASA’s Jet Propulsion Laboratory in Pasadena, Calif., told SPACE.com in a video interview. “It’s almost like the drill grabs the rover and shakes the whole thing electronically.”

Luckily, this grave issue had been spotted while the rover was still on Earth. Still, engineers only had a month or two to work-out a fix before Curiosity had to be launched millions of miles into space. Engineers eventually bolted in an additional set of wires that could be used to keep Curiosity’s power bus safe, by shorting it temporarily in advance of any big drill problems.

Still, Curiosity mission officials claim without a doubt that the flaw will not affect the rover’s integrity during its minimal mission – a two year slate during which the rover needs to determine  if the Red Planet could ever have hosted microbial life. Of course, JPL scientists are looking to remotely operate the rover for as long as it is scientifically feasible. The Opportunity rover, Curiosity’s predecessor, touched down on Mars in 2004 for a planned mission of 90 Martian days – after more than 8 years Opportunity is still exploring Mars well and safe, constantly reporting back with important scientific findings.

Hopefully, Curiosity will outlive Opportunity and provide even great advancements in our understanding of the Red Planet, considering it is a lot bigger and more advanced than any of its predecessors. One of its advanced instruments is this nerve wracking drill that’s been causing so much stress lately. The instrument can dig up to an inch into the Martian rock, deeper than any rover has been able to go before.