by Mihai Andrei
in Alien life, Astronomy, Geology, Space
Reading Time: 3 mins read
A A
Share on FacebookShare on TwitterSubmit to Reddit

The first sample from underground Mars will come from a rockbed that showcases unexpected mineral veins of gypsum. 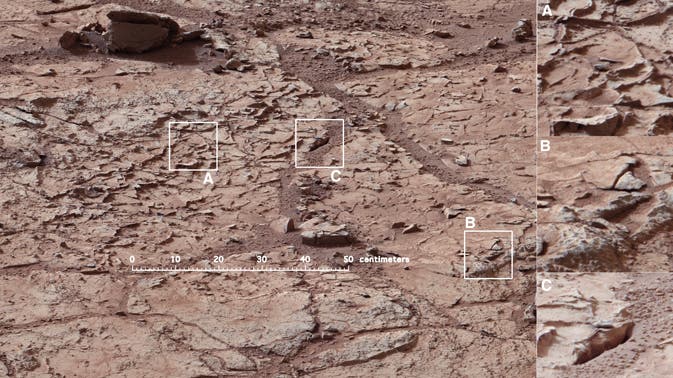 Astronomers and geologists are now in the equivalent of a Martian candy store of scientific objectives: the lowest point of Gale crater, called Yellowknife Bay is literally teeming with minerals that could only be formed in the presence of water – most notably, gypsum. Project leader John Grotzinger explained during a press conference that the area is a “[..] jackpot unit. Every place we drive exposes fractures and vein fills.”.

The scientists initially decided to visit this area just as a small detour on Curiosity’s way to Mount Sharp, but when they observed the richness of objectives, they decided the rover should definitely stay a while, and even start drilling for the first time. The drilling will consist of five holes about 5 cm deep into the bedrock; the rover will then collect rock powder from the site and analyze it.

“Drilling into a rock to collect a sample will be this mission’s most challenging activity since the landing. It has never been done on Mars,” said Mars Science Laboratory project manager Richard Cook of NASA’s Jet Propulsion Laboratory in Pasadena, Calif. “The drill hardware interacts energetically with Martian material we don’t control. We won’t be surprised if some steps in the process don’t go exactly as planned the first time through.” 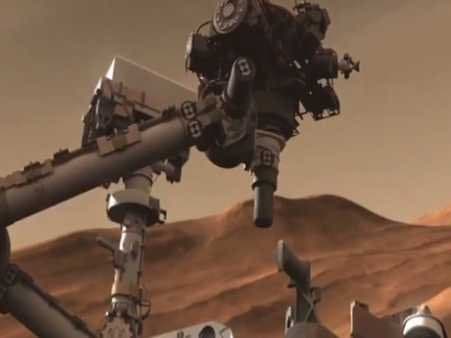 It is generally accepted that the now barren Martian surface was once covered with vast quantities of water. Furthermore, it is believed that the water occured in many forms – still lakes, rivers, and even seas; all these lead to the conclusion that Mars was once habitable. The discovery of the mineral-filled veins within Yellowknife Bay rock fractures adds to the picture because this type of minerals can only form in the presence of water.

“These veins are likely composed of hydrated calcium sulfate, such as bassinite or gypsum,” said ChemCam team member Nicolas Mangold of the Laboratoire de Planétologie et Géodynamique de Nantes in France. “On Earth, forming veins like these requires water circulating in fractures.”

They didn’t find any sites like this close to the landing site, so finding one now seems a fluke.

“The orbital signal drew us here, but what we found when we arrived has been a great surprise,” said Mars Science Laboratory project scientist John Grotzinger, of the California Institute of Technology in Pasadena. “This area had a different type of wet environment than the streambed where we landed, maybe a few different types of wet environments.”

The drilling is expected to reveal even more information; the rock chosen for this innovative mission has been named “John Klein” in tribute to former Mars Science Laboratory deputy project manager John W. Klein.