Chris Hadfield is a (now retired) Candian astronaut – the first Canadian to walk into outer space; on 19 December 2012, Hadfield launched in the Soyuz TMA-07M flight for a long duration stay on board the International Space Station as part of Expedition 35. He was the commander on the ISS until May 12 May 2013. In total, Hadfield spent 14 hours, 50 minutes outside, travelling 10 times around the world during his spacewalk.

He gained even more popularity by chronicling life aboard the space station in a blog and taking several remarkable pictures and posting them through Twitter and Facebook to a large following of people around the world. He also recorded a song onboard the ISS. Now, he has taken the time to answer a few questions on Reddit, as part of an AMA (Ask Me Anything) – and the insight he provides is just amazing: 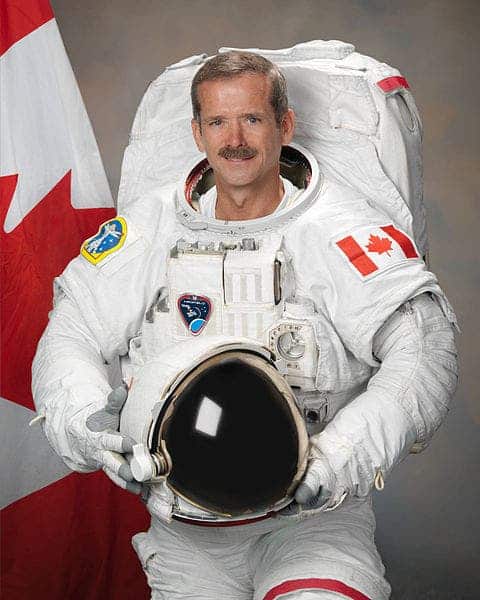 Chris Hadfield (C.H.): I am Commander Chris Hadfield, recently back from 5 months on the Space Station. [..] So, reddit. Ask me anything!

User (u.) huh009: Hi Commander Hadfield! I’m curious to know, is it possible for someone to get stuck floating in the middle of a room in the ISS? As in they’re floating and the walls are out of reach.

C.H.: Yes, it is – you can get stuck floating in the center of Node 1, where open space is biggest due to hatches on all sides. But ISS has fans and forced air to mix and refresh the internal atmosphere, so there’s always a small crosswind. Wait long enough, you’ll get pulled to an air inlet.

u. texasranger101: What’s your favorite city to look at from space?

C.H.: Cool question. As I think about it I’m mentally playing back all the imagery and feeling of seeing cities from ISS.
My favorites are the big, old cities, as they are well-lit testaments to history and culture – London, Paris, Cairo.

u. HCM4: Have you had any close calls/accidents while in orbit?

C.H.: I was blinded by contamination in my spacesuit during my 1st spacewalk. It was the anti-fog used on my visor, took about 30 minutes for my eyes to tear enough to dilute it so that I could see again. Without gravity, tears don’t fall, so they had to evaporate. No way to rub your eyes inside the helmet.

u. igloo27: That sounds like a terrible situation. What happens if you sneeze in the helmet?

C.H.: When we have to sneeze in our spacesuit, we lean our heads forward and sneeze into our chest, to keep it from splattering on the visor. Still messy, but the best compromise – clean it up when you de-suit.

u. lunacite: Two questions:
1. What is your favorite Sci-fi movie?
2. Do you think that funding priority should go towards manned or unmanned space exploration?

C.H.: 1. Galaxy Quest
2. Both, always both. They serve different purposes – we need robots and sensors for certain tasks and risk levels, but we need people to understand, solve and appreciate the complexities of being in a new place.

u. IAMAfortunecookieAMA: Hi Chris! What an awesome opportunity- thanks for fielding our questions!
Did you have to pass through Customs or some other international checkpoint when you landed in Kazakhstan?

C.H.: Yes, we did. NASA kept our passports and visas, and brought them to us at landing, so we had them at the Karaganda airport to leave Kazakhstan. A funny but necessary detail of returning to Earth.

u. blizzardalert: Two questions:
1) How much damage did you body have when you came back to earth? Could you walk, did you find yourself nauseous, etc.
2) Where do you see manned spaceflight going in the future? Do you think we could ever have a moon base, or a mars base, or even make it out of the solar system.
Thanks, and I want to thank you and your mustache for being so awesome.

C.H.: Right at landing I felt dizzy, heavy, and then nauseous. After working out 2 hrs/day on ISS I was plenty strong, just disoriented. The inner ear takes time to recalibrate, as does blood pressure. Within 12 hours I could walk fine, though with a bit of staggering.

I see human spaceflight moving ever-outward from Earth. The logical sequence is Earth orbit, the Moon, asteroids, Mars. We have so much to learn/invent at each step, and there’s no rush. It needs to be both driven and paced by technology, and drawn by science, discovery and then business.

u. DSou7h: Hi Col. Chris! Reaaally important question. Do you fart more or less in space?

C.H.: More – because it’s impossible to burp when weightless (the gas, liquid and solid in your stomach all mix together).
As an experiment, try standing on your head and burping.

u. Sharetheride: Do you believe in extraterrestrials?

C.H.: I’ve always thought that was an odd way to ask. ‘Believing’ and ‘believing in’ are 2 different things.
Our best telescopes have shown us that there is basically an unlimited number of planets in the universe. To think that Earth is the only one where life could have developed is just self-importance.
But to think that intelligent life has traveled all the way here and is sneaking around observing us is also just self-importance.
The universe is basically endless. We have not yet found life anywhere but on Earth, but we’re looking for it, to the best of our technical ability. All else is wishful thinking and science fiction.

u. LionTamer8: If you could’ve had any animal in the ISS with you, what animal would it be?

C.H.: It’s a strange environment, weightlessness. I wouldn’t want to bring an animal that would be scared or unable to adapt. Also food and pooping are problematic. So perhaps something calm and simple, a reliable pet, like a snail.
Nah, who am I kidding – I’d like Albert, my pug. He’d be hilarious and cheerful.

u. Mother_Of_Reposts: Hi Chris, nice to see you here! How would you describe space to someone who hasn’t been there? And what are your goals for 2014? Thanks!

C.H.: Space is profound, endless, a textured black, a bottomless eternal bucket of untouchable velvet and untwinkling stars.
My goals for 2014 are the same as always – learn things, be useful, feel satisfied, play music, laugh and have fun, every day.

u. mossman85: Do you know if sex in space has been attempted before?

C.H.: Not that I know of, and with a small crew, the interpersonal psychological effects would be complex and perhaps destructive. Astronauts are just people in space, but we are professionals and crewmembers, and mutual respect and team success is key.

u. RileyRichard: Hello Chris, I have a question I’ve always wanted to know. How often do you guys use your imagination while floating in zero gravity, like do you ever imagine yourselves as Superman flying?

C.H.: Yes, we even pose for Superman-like pictures, normally with a big goofy grin on our faces. But the inside of ISS is small enough that super-hero leaps often end in a tumbling crash into the other wall.
An interesting experiment on ISS is to close your eyes and imagine that, instead of flying, you are falling. You can suddenly make the mental transition and it can be startling, like that panic rush you get in a dream. Then you open your eyes :)

u. HeadStonemason: Hello Commander Hadfield,
Thanks a lot for your videos while you were in space – they were pretty awesome.
What was your favorite part of Canada to look at as you passed over it?

C.H.: I felt a special thrill when I could see the plume of Niagara Falls from orbit. It’s a wonder of the world up close, and very cool to see from ISS.
I also liked seeing the Manicouagan Crater in Quebec, a 215-million-year-old scar 100 km across, evidence of a huge asteroid impact, still easily visible to passing spacecraft.

u. StaplingDean: What’s your favorite book (other than your own)?

C.H. Picking one book is hard – I liked Before the Dawn, Carrying the Fire, and I read Darwin’s Ghost while on orbit. I also read Sh*t My Dad Says up there.

u. CaseyDiamandis: What did you honestly think of the movie “Gravity”?

C.H.: Gravity is visually the most realistic spacewalking movie ever made. I’ve done 2 spacewalks. They got the immensity and tumult of it just right, the feeling of tininess in a vast universe, with an ever-omnipresent Earth. The story line is very Hollywood, with lots of technical errors and oversights, but it’s not intended to be a documentary or training film. It’s just entertainment, and Sandra Bullock does a great job with her role, triumphing over adversity. As an engineer and astronaut I can easily criticize it, but why would I? Just sit back, relax, and enjoy the spectacle.