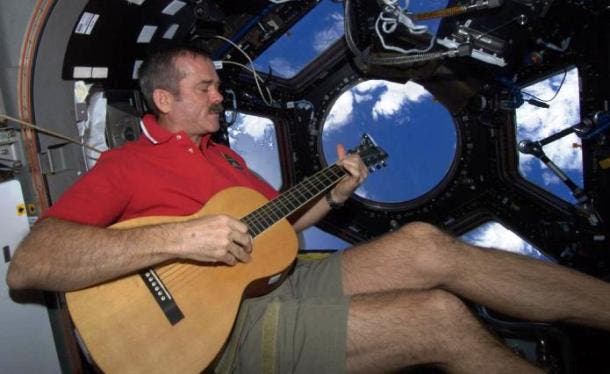 While important scientific experiments, studies and research are conducted on a daily basis on-board the International Space Station, the astronauts stationed there sometimes have to unwind. Microgravity, radiation, upside down exercising, the constant racket from air pumps and fans …well they all take a toll. Sure the view helps, but sometimes people feel the need to do creative tasks in order to turn down the pressure.

Some astronauts build scale Lego replicas of the ISS on-board the ISS, while other play baseball with themselves through the station modules.    Chris Hadfield, a Canadian flight engineer, has a thing for music and recently recorded himself playing an original tune he titled “Jewel in the Night” – not that bad either. The song was uploaded on youtube and can be heard below.

Besides this little tune, Hadfield also recorded some ambient sounds from the space station, which are a heck of a lot louder than one would expect. The space station toilet flush was particularly interesting.