Aboard the ISS: how to wash your hair in space 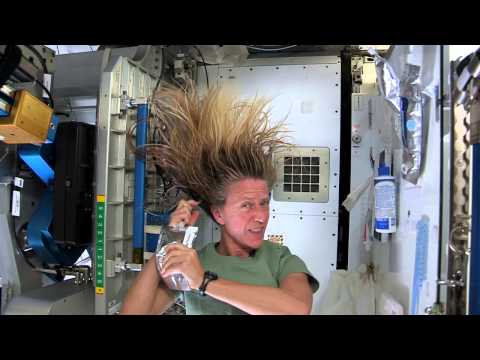 Every little thing we hold for granted here on familiar ground and gravity is different in space. Take washing your hair for instance. Expedition 36 crew member Karen Nyberg recently uploaded a video on YouTube which has since gone viral which demonstrates how astronauts aboard the International Space Station wash their hair in microgravity.

At first glance, everything’s normal. We’re presented with water, shampoo, a towel and a comb. So far nothing out of the ordinary, but wait! We’re in microgravity now and water doesn’t pour. Goodbye long, hot showers! Instead, Karen has to apply water on her scalp (thank goodness for surface tension), just like she would with a cream back on terra firma, then the no-rinse shampoo, then again a bit of water. Everything sticks thanks to surface tension, but sometimes like you can see in the video some water droplets fly away. Honestly, at first I thought this would be extremely difficult, but Nyberg demonstrated that this process is totally doable, safe and quick (under 3 minutes) in space. Guess it would have been really cumbersome for the astronauts if they all had to shave their heads.

What’s also fascinating to point out is how the ISS is all a biosphere. For instance, Nyberg mentions at the end of the video how the water she used to wash her hair doesn’t go to waste. The water in the hair humidifies the air, which is then sucked up the station’s air conditioning system before it condensates for use as drinking water.

Before Nyberg, astronaut Chris Hadfield, who has since then returned to Earth, had released a series of extremely fascinating and entertaining videos that present life on in the International Space Station. Hadfield’s stints included a cover of Bowie’s Space Oddity track, with a video featuring Hadfield and his guitar floating about the space station, but he also showcased some insights into ISS hygiene when he demonstrated how to brush your teeth in space.

In other related news, NASA has recently been granted three patents for technology that more or less will be used to developed high-tech coffee mugs for use in space. You’ll laugh, but there’s no laughing with hot coffee in microgravity. Coffee inside a regular mug won’t do in space, since the liquid behaves extremely strangely and concentrates into blobs.

“The coffee would be very hard to control,” Mark Weislogel of Portland State University told Nasa.

“In fact, it probably wouldn’t [come out of the cup]. You’d have to shake the cup toward your face and hope that some of the hot liquid breaks loose and floats toward your mouth.”

In space, no one can hear you scream…