by Mihai Andrei
in Geology, Mathematics, News
Reading Time: 4 mins read
A A
Share on FacebookShare on TwitterSubmit to Reddit
ADVERTISEMENT
ADVERTISEMENT

French researchers say they are close to developing seismic ‘invisibility cloaks’ which would cancel out potentially hazardous earthquake shockwaves, protecting key buildings or even entire cities.

Nuclear power plants especially, and potentially entire cities could be cloaked using this technology – if the researchers’ theories are true (which seems highly likely). They believe that by drilling boreholes in a precise pattern into the ground, they could divert seismic waves and averting any negative results. They’ve already teamed up with geo-engineering company Ménard to build upon their results.

“You can build on this knowledge to create an invisibility cloak which will actually protect a specific site from seismic waves,” says the leader of the team, physicist Sebastien Guenneau, who published the work in Physics Review Letters in late March.

They are currently testing to see if they can protect an area the size of a football field from an earthquake.

In the early 2000s John Pendry from Imperial College London, shook the world when he proposed an invisibility cloak. Several years later, in 2006, he actually built one, but it wasn’t invisible in visible light, but in microwaves. The big problem when trying to develop invisibility cloaks is the sheer difference in size between light waves and real life objects. However, seismic waves are relatively similar in size to large objects like buildings or even cities. This technology works on the same basic principles as proposed invisibility cloaks – but this approach is incredibly creative, a pure example of out-of-the-box scientific thinking. 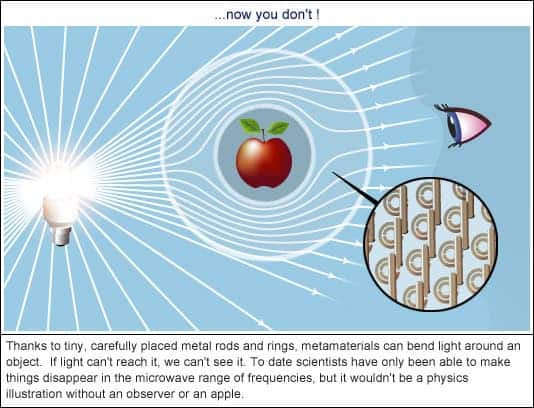 Seismic waves are basically acoustic waves – but instead of propagating through air, they propagate through the ground. They therefore share a similar behavior (in some cases) with light waves. Invisibility cloaks work by developing materials with geometric structures smaller than the wavelength of the light they are deflecting. In the case of the earthquakes, the holes are boreholes in the ground. The team calculated that for earthquake wavelengths of around 1.5 meters, the boreholes would need to be 30 cm wide and spaced 1.73 meters apart. How this works is that the holes scatter the incoming waves, and if you place the boreholes just right, the scattering makes the waves to cancel each other out. But there are several issues with this approach.

First of all, you can’t really control the properties of soil – like you can do to a material in the lab. Soils vary laterally, and are dynamic in nature.

“Soil is a different story. Its properties are difficult to characterize, and depend on different things, such as the weather! It makes the mathematical models much more difficult.”

Other researchers have toyed with a different approach for an earthquake invisibility cloak, but when the French scientists first come up with this idea in 2010, they were ridiculed by many. However, they stuck to their idea and convinced Stephane Brûlé, an open-minded geo-engineer to join them. Luckily enough,  Brûlé has a company -Ménard, and he was able to jump start the project.

In 2012, they got the first practical results. After looking carefully through the weather prognosis, they chose three days of consistent sunny weather in August, near Grenoble, at the foot of the Alps. They measured the seismic waves naturally hitting the area, and after that, they dug their holes: three rows of five meter deep boreholes. They then stopped an measured again – it worked.

“It’s interesting because these are the first experimental results on this topic,” says physicist Boris Kuhlmey who studies electromagnetic metamaterials at the University of Sydney. But he points out the bore pattern the team used would only reflect seismic waves of a specific frequency. “If your aim is to stop an earthquake you don’t get to choose the frequency,” he says.

That’s the second problem with this approach. While you can study a statistical distribution of earthquake frequencies and make a very educated guess (in some cases more than others), you might still be off in your estimates. But Guenneau developed a mathematical model that might provide a “zero stop band”, which can stop a wide range of earthquake waves.

“That would be really key to get it to work well. Maybe it’s possible, on the scale of a city, to diminish the impact of an earthquake considerably,” says Kuhlmey.

Now, they’re set to try it out for good – they’re going to simulate really big earthquakes (magnitude 6) around their test site, which will be protected by boreholes. The boreholes are arranged in a ring with a diameter of about 200 meters. To say that I’m really looking forward to the results is an understatement.

“It would be a dream for me to see this done for real one day, not just tests,” muses Guenneau. In the meantime he is already turning his skills to other problems, such as tsunami control. “Imagine some columns of wood, 200 m from the sea shore, arranged in a similar fashion to the bore holes in the seismic experiments. The effect will be that you deflect the tsunami to a non-sensitive coastal area.”