by Tibi Puiu
in Physics, Technology
Reading Time: 3 mins read
A A
Share on FacebookShare on TwitterSubmit to Reddit

Invisibility cloaks have become the object of study for many research institutes out of a number of considerations. There’s the simple scientific thrill of breaching the SciFi barrier, something every researcher dreams of. Then of course, there’s always the corporate and military tail that always likes to meddle with concepts that shine with the possibility of profit or strategic edge, and is always quick to offer incentives – money. Advancements in this direction have been nothing short of mind boggling, as we’ve reported in the past about a few working models, developed at great pace in the past few years alone. The latest invisibility cloak comes from scientists at University of Rochester in New York, and differentiates itself by extremely simple design, reminiscent of tricks magicians use on stage to hide objects, and its high potential for scaling the cloak for large objects like the human body or even satellites.

Most invisibility cloaks today work by exploiting two core ideas: transformation optics (bending light around a region of space to make it look as if it weren’t there) and metamaterials ( synthetic substances with optical properties that can’t be found anywhere else in nature designed specifically for cloaking). The ultimate goal is to produce an invisibility cloak that can hide a human from optical observations, Harry Potter-cloak style. This hasn’t been possible as of now, though.

The problem lies in compromise. So far, cloaks have been made that can hide objects in 3-D only at a single microwave frequency. Then, there are cloaks that can hide objects over a wide range of optical frequencies, but only work from a certain viewing angle. Apparently, you can’t have both – not just yet at least. 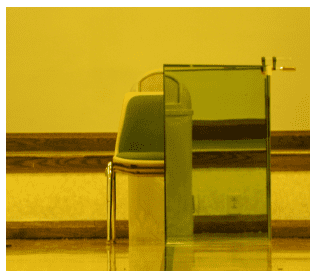 The  University of Rochester cloak unveiled just recently had to make a compromise as well, and the researchers chose settled for a limited viewing angle for their device. It makes up for it, however, by functioning over the entire optical spectrum and, most importantly, through its potential of being scaled for extremely large objects.

Besides, their approach is extremely simple and doesn’t require expensive and difficult to implement metamaterials. To cloak, the device makes use of an array of lenses or mirrors that steer light around the region of space they want to hide. Mirrors can be fashioned into any size, easily and cheaply.

To demonstrate the cloaking ability of their device, the researchers cloaked a chair with a trash can behind it. “This volume is sufficient to cloak a human, albeit with not as much convenience as Harry Potter’s cloak,” say John Howell at the University of Rochester in New York.

Can their work have any potential application? The researchers seem to think so. Despite being unidirectional, the cloak can be scaled to very large sizes and could have value, for example, in cloaking satellites in mid- to high-earth orbit, making them optically invisible from Earth-based observations. A system might be employed to constantly shift the angles of the mirrors as the satellite swirls through orbit.

Findings were reported in a published paper.