A map of every meteor strike since 2300 BC

by Tibi Puiu
in Geology, Other

The recent historical flyby of 2012 D14 – the largest asteroid ever to pass this close to Earth in recorded space observational history –  as well as the modest in size, but monumental in punch meteorite that exploded over Russia caused an whole frenzy around them on the web. 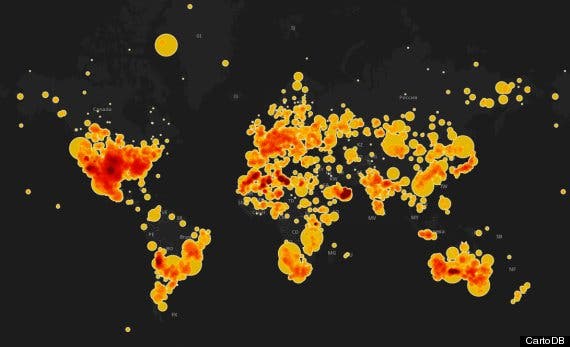 Thing is, meteorites and asteroids have been flying by and colliding with Earth long before the internet was invented, to the surprise of some folks. Javier de la Torre, cofounder of geo software companies Vizzuality and CartoDB, showcases this idea perfectly with his interactive map of every meteor strike on Earth, those found at least, since 2300 BC.

Actual impact data collected from the Meteoritical Society was used and you can click on specific impact sites in order to see the size, location and year that the meteorite strike occurred. If you’re more interested to find out how the map was created, check out de la Torre’s  blog post on the subject.

Check out the map here.

As you can see, North America and Europe have been simply bombarded along the years more than every other area on Earth. However, that’s not to say that other regions of the world have been spared; simply put, not enough data was available.