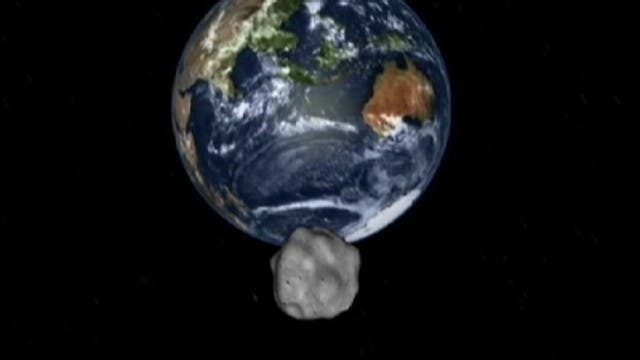 Tonight a historical event is about to occur after an asteroid half the size of a football field, called “2012 DA14”, is set to make the closest flyby to Earth any asteroid of its kind has ever made, since we know of. NASA along with all the other space programs in the world positively dismiss any claims that the asteroid might hit Earth, however paranoia is apparently sweeping the internet, fueled by a recent meteorite that exploded over Siberia causing damage and injuring a few hundred people in the ensuing shock wave.

The asteroid was discovered only last year by a group of amateur astronomers, and is set to make its closest approach to Earth at 2:25 p.m. ET, when the asteroid is zooming above the eastern Indian Ocean at a speed of almost 17,500 mph (7.8 kilometers per second). Unfortunately for amateur gazers, the event won’t be visible with the naked eye, although some of you might be able to catch a glimpse with a pair of binoculars or lower power telescopes if you know where to look exactly.

NASA Television will provide commentary starting at 11 a.m. PST on Friday, Feb. 15, so be sure to tune in.

Again, scientists all over the world wish to calm any restless spirits by the event, assuring that there isn’t any chance the asteroid will hit Earth, and even though it will pass Earth actually below the geosynchronous orbit satellites use, DA14 has its orbit very well mapped out so there’s isn’t any danger it will damage satellites or the International Space Station.

Still, a lot of people were taken aback by yesterday’s event when a meteor steaked through the sky above Russia. It’s still unclear whether meteor fragments reached the ground or if the resulting damage that injured nearly a thousand people was just caused by the shockwave. On Friday morning, the UK Space Agency rejected any link, claiming the meteor incident over the Ural Mountains in Russia was “not related to asteroid 2012 DA14” – it’s just an independent event, although it’s quite the coincidence.

The video below shows some collective footage shot by amateur observers of the recent fireball that swept the Russian skyline.