That’s what NASA officials have been telling the press recently, at least. If you haven’t heard yet, a football field-sized asteroid called 2012 DA14 is expected to come buzzing past Earth later this month, making it, in NASA’s own words, a ‘record-setter’ in terms of asteroid proximity. 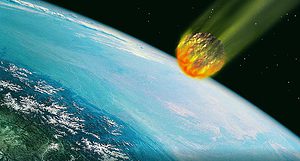 The asteroid will pass so closely by Earth that it will not only fit through the gap between the Moon and Earth, but actually fly by next to current satellites orbiting our planet. More exactly, astronomers believe the asteroid, which was discovered just last year, will come within 17,200 miles of the planet when it makes its cosmic fly by.

Now, I like records. I think every milestone is a reason to celebrate; it symbolizes a breakthrough, evolution, you name it, but 2012 DA14 isn’t exactly what I had in mind. It’s scary.

“This is a record-setting close approach,” Don Yeomans, the head of NASA’s asteroid-tracking program, said in a statement.
“Since regular sky surveys began in the 1990s, we’ve never seen an object this big get so close to Earth.”

I can tell you’re getting anxious. Good news is that, according to NASA officials at least, that there’s absolutely no chance whatsoever that 2012 DA14 will impact Earth, like my colleague Andrei reported earlier last week. Still, if it would have, its composition and size (some 150 feet and 143,000 tonnes) wouldn’t cause incommensurable amounts of damage. Apparently, though it’s so close to the geosynchronous orbit satellites typically fly on, there are little to any chances the asteroid will impact a satellite.

“2012 DA14 will definitely not hit Earth. The orbit of the asteroid is known well enough to rule out an impact,” said Yeomans, who heads the Near-Earth Object Program at NASA’s Jet Propulsion Laboratory in Pasadena, Calif. The odds that the asteroid could slam into a satellite are also “extremely remote,” he added.

Ok, now the bad news. The asteroid is set to return on yet another close encounter with our planet seven years from now. So far scientists are rather confident that Earth’s gravity won’t affect 2012 DA14’s trajectory, but nothing is certain for sure.

Earth comes into “close” contact with such asteroids about every 50 years, and is only hit by them every 1,200 years, Yeomans estimated. Oddly enough, in 1908 an asteroid of similar size exploded in the atmosphere above Siberia leveling hundreds of square miles in what scientists refer to as the “Tunguska Event.”