Videos of asteroid 2012 DA14 making its flyby past Earth

by Tibi Puiu
in Science, Space, Videos
A A

The weekend that has just passed was a tight one for asteroid news. At the center was of course the much raved about “2012 DA14”
– the closest asteroid of this significant size to flyby Earth since recorded history – which actually speared passed Earth at an altitude of 27,700km, a few thousand kilometers below  the satellites’ orbit. Yeah, that was a really close call. On Friday, a meteorite only a few meters wide exploded above the Ural mountains in Russia, shattering thousands of windows and injuring almost a thousand people in the process.

Apparently, the Russian meteorite was an unrelated event from 2012 DA14, although the circumstances seemingly point otherwise. Nevertheless, the ensuing fireball made a lot of fuss on the news and the media, with extensive video footage being available on youtube – just do a quick search. However, it seems there is little to any interesting video footage of the 2012 DA14 asteroid flyby, which by now has turned into a significant historical event. The best videos showing the asteroid live as it makes its way pass Earth that I could find are some captured by a couple of observatories in Australia, from where the show could had been seen at its top display. 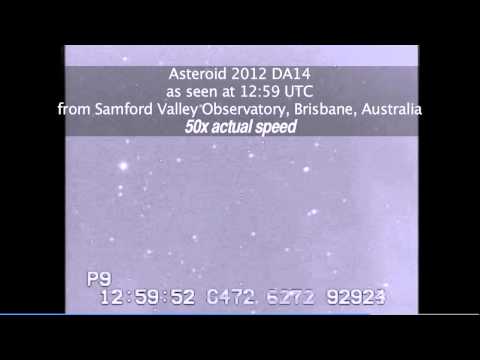 The first one from below was captured by the Brisbane’s Samford Valley Observatory, which also offers the best quality out of the batch. Now, the asteroid is fast, but not that fast – so don’t let the video fool you. It’s been sped up by a factor of 50. 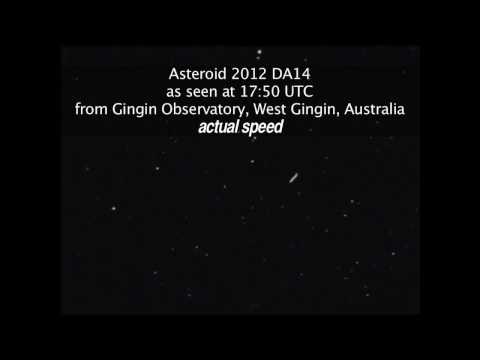 Second one comes from the  Gingin Observatory in Perth, Western Australia – this time at actual speed.

Finally, Murrumbateman Observatory in Canberra captured these pictures below. 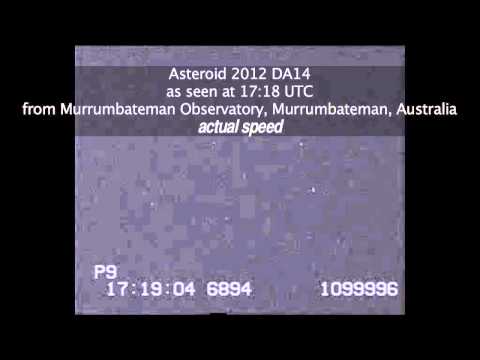 Yes, these aren’t as far as spectacular as the Russian fireball, but believe me this is pure gold as far as astronomical observations go. Try playing these videos again, only this time imagine that faint moving dot is actually a 50m wide 190,000t asteroid which could have potentially hit Earth causing untold damage. Now that’s something to put into perspective.