Could humans have learned from Hobbits?

by Mihai Andrei
in Anthropology, Archaeology, Studies
Reading Time: 2 mins read
A A
Share on FacebookShare on TwitterSubmit to Reddit 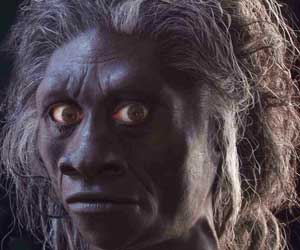 There has been a lot of debate around the whole ‘hobbit issue‘ and I’ve been watching that pretty closely. It was especially interesting to see how creationists adapted to the situation. The thing is every answer raises even more questions.

Recently, researchers discovered thousands of small, sharp-edged objects made from volcanic tuff or chert in the house of the hobbit (H. floresiensis), the Flores islands in Indonesia. This puzzled researchers because H. floresiensis has a brain so small that it seems impossible for them to create craft objects. Still, this is clearly the case. What’s even more surprising is that in a very younger layer they found H. Sapiens (that’s us, kids) with the same tools.

Archaeologist Mark Moore of the University of New England in Armidale, Australia along with his colleagues concluded that H. floresiensis made the tools and then, H. Sapiens somehow learned to do them.

“I can see how different hominins might converge on the techniques themselves, but I find it more difficult to understand how those permutations [combinations of techniques] could be so similar without more direct observation or interaction.”

The study was backed up by many archaeologists, who named it a “model study”, that leaves little if any room for interpretation and it also corrects the previous opinion. This discovery also forces scientists to rethink what they know about brains of smaller size in general. But while this dilemma is solved, the whole humans learning from hobbits theory hasn’t convinced many. “Homo sapiens might have made the lot of them,” says John Shea from the Stony Brook University in New York state. However, here is where there is some room for guessing and it’s also going to be hard to find undeniable proof to clarify this issue.

[Unfortunately, we can’t capture all the interesting stuff, so we kindly ask you guys to send us anything you think is interesting or that you think people should know about. This research was pointed to us by George Mills. Thanks George, and let us know if there’s anything else you find]