by Mihai Andrei
in Geology, Studies
Reading Time: 2 mins read
A A
Share on FacebookShare on TwitterSubmit to Reddit 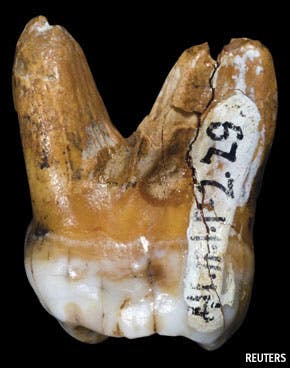 Svante Paabo, the researcher whose work provided the basis for the Jurassic Park movies seems to have struck gold once again; this time it’s about a finger bone older than 30.000 years, found in the Altai mountains, that as far as DNA analysis has shown, belongs to no known species of humans. They also found a tooth that produced more evidence in this direction.

The discovery is absolutely extraordinary on many levels; first of all, it raises some questions regarding human fossil hunting in the lesser populated areas of Asia, who have provided spectacular discoveries on numerous occasions, despite the fact that to be honest, they have not been as ‘generous’ as Africa and Europe (known especially for Neanderthal populations); good Asian fossils come mostly from China, in the Pekin Mountains, and Indonesia, which is home of the fascinating “hobbit“. Second of all, it is very possible that some populations that inhabit the Melanesian islands in the Pacific Ocean have picked up some genes from this new species (or perhaps some ancestor). Studies showed that Homo Sapiens started their journey from the ‘cradle of life’ in Africa some 60.000 years ago, and after going through the straits of Bab el Mandeb, from modern Djibouti to modern Yemen, they headed towards the South coast of Asia, but never went too far inland.

It would be too far fetched however to start thinking about a missing link, but it should show us that there probably are other species that inhabited the earth some tens of thousands of years, and studying and understanding them could provide insight on our own species, and where ‘we came from’.