New Light Shed On The ‘Hobbit’ 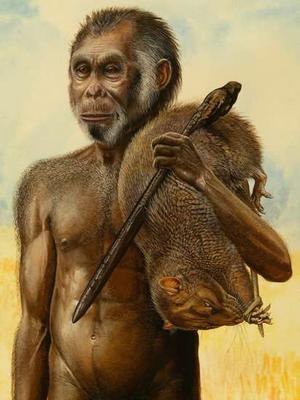 Homo floresiensis (“Man of Flores”, nicknamed Hobbit) is the name for what may be a species in the genus Homo, remarkable for its small body, small brain, and survival until relatively recent times. It is a 3-foot-tall, 18,000-year-old hominin skeleton with no chin and some other  strange and less obvious features. It is believed that the species has survived on Flores until at least as recently as 12,000 years ago making it the longest-lasting non-modern human, surviving long past the Neanderthals. There is also evidence of advanced the use of fire for cooking in Liang Bua cave, and evidence of cut marks on the Stegodon bones associated with the finds; they also probably used stone tools of the sophisticated Upper Paleolithic tradition typically associated with modern humans.

An international team of researchers led by the Smithsonian Institution has finished a study and it offers one of the most striking confirmations of the original interpretation of the hobbit as an island remnant. The brain is way smaller than that of a human yet they do show obvious sings of intelligence. So it was strange for the researchers to study the 12 skeletons discovered and find out that the hobbit’s wrist is basically indistinguishable from an African ape or early hominin-like wrist. So this makes it clear that the hobbit is not a human with a growth disorder but that it is indeed a different species of human as was originally proposed by its discoverers.

They used cutting-edge 3-D technology to study which would have not been an option years ago. The 3-D techniques used for the analysis were developed during the past few years at the Partnership for Research in Spatial Modeling at Arizona State University. The lead author of the study, Matt Tocheri concluded:

Think about that for a large family.