by Tibi Puiu
in Technology
Reading Time: 3 mins read
A A
Share on FacebookShare on TwitterSubmit to Reddit

The year is 2013, but offices and business headquarters are still riddled with stacks and tonnes of paper. The future is disappointing. Researchers at Queen’s University, in collaboration with  Plastic Logic and Intel Labs, recently unveiled an extremely interesting concept which address this issue and aims to put both office work and leisure desk activities into the 21 century – tablet-like displays as thin and flexible as a sheet of paper, intended to replace actual paper. 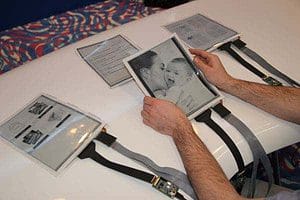 Called the PaperTab, the “paper tablet” is actually a 10.7” flexible plastic touchscreen display, powered by the second generation Intel Core i5 Processor. I don’t have that much insight, but I’m guessing that the processor isn’t actually built-in the tablets, but actually separate and connected through the wires you can see in the photo and in the video posted below.

“Using several PaperTabs makes it much easier to work with multiple documents,” says Roel Vertegaal, Director of Queen’s University’s Human Media Lab. “Within five to ten years, most computers, from ultra-notebooks to tablets, will look and feel just like these sheets of printed color paper.”

From the press release product description:

“A user to send a photo simply by tapping one PaperTab showing a draft email with another PaperTab showing the photo. The photo is then automatically attached to the draft email. The email is sent either by placing the PaperTab in an out tray, or by bending the top corner of the display.

Similarly, a larger drawing or display surface is created simply by placing two or more PaperTabs side by side. PaperTab thus emulates the natural handling of multiple sheets of paper by combining thin-film display, thin-film input and computing technologies through intuitive interaction design.”

I won’t go into too much functionality details since the video below does a pretty good job at explaining everything the PaperTab’s good for.

I’ve posted about the PaperTabs in the first place because I find the prospects appealing and the product seems genuinely interesting, but boy does it have a lot of loose ends. First of all, notice the connecting cables. Your whole idea is to replace stacks of paper and office work, turning it into a more interactive, easy to manage experience, while clogging the room with power cables? Not the best trade off. A battery that thin would be difficult to implement and it would make the PaperTab incongruous to its paper sized goal, that I admit, but layering my whole work space with cables isn’t my idea of optimizing. Maybe wireless charging? I’m guessing pricing is a huge factor at play, and these PaperTabs need to be cheap if I’m to order 5 or 10 of these.

Sure it’s interesting, but as tablets get ever thinner, smarter and cheaper, where’s their edge? Have your say in the comment section below.