by Tibi Puiu
in Other, Science
Reading Time: 4 mins read
A A
Share on FacebookShare on TwitterSubmit to Reddit 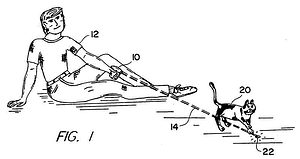 The United States is a country renowned for its history of technological innovation and stewardship. Some of the world’s greatest inventors, though not all of them may have not been born there, first displayed their work in the US. Samuel Colt (colt revolver), A.G. Bell (telephone), Thomas Edison (light bulb, among many), George Washington Carver (he invented three hundred uses for peanuts!), Ben Franklin (lightning rod) and so on; these are just a few great American inventors whose inventions have made them famous and, more importantly, have improved the quality of life for billions and countless generations after them.

Some inventors set out to devise their inventions out of pure love for humanity and science, others however do it powered by an over-inflated ego looking for recognition and financial gain. Both personalities have along the years produced marvelous work, and we as simple beneficiaries of these inventions are left in a difficult position to judge. Nevertheless quarrels over who invented the “X machine” or the “Z device” and whatnot have always been inevitable, which why patents where introduced in the first place – to protect both the invention and inventor. Patents, unfortunately, sometimes can actually halt the development of a piece of technology if they fall in the wrong hands. It’s enough to take a glance at the ridiculous software patent war going on between the likes of Apple, Google and Samsung to understand what I mean.

During the spring of 1790, the U.S. government passed the first patent law, meant to offer the necessary means to inventors to protect their work. Surprisingly enough, only three patents were filled during that year, though its not clear whether this very tiny number was due to bureaucracy or actual applications. What’s clear though is that soon after things ran much smoother and by 1836, the total had climbed to almost 10,000. It was clear by then that patenting was a serious business and a greater degree of organization for technology valuation was required. So the government decided to move all patents and related papers in a newly built, beautiful building that was fire-proof and safe. Of course, as faith is often ironic in such occasions, the building in question caught fire and all the patents were destroyed. Oh, and allegedly the burned down patent building was sited next to a fire station. Incredible, I know!

The U.S. government has since learned its lesson and beyond making actual copies of patents from there on, no other patent since – eight million signed patents to this day – has been lost. The documents that were burned in the early XIXth century however have remained in history classified as the “X-patents”. Most of them are certainly lost, but we have a barebones record of what used to be there, since the collection was partially reconstructed using the inventors’ copies,  which offers some insights into what America’s inventors at the time were preoccupied with. Only 2,800 patents have since been recovered and here are just a few such X-patents.

The first patent in US history was snagged by Samuel Hopkins of Pittsford, Vt on July 31, 1790. It wasn’t that thrilling though. His invention improved “the making of Pot ash and Pearl ash by a new apparatus and Process.”

Eli Whitney’s Cotton Gin is an invention already familiar to most Americans, thanks to its enormous importance in the industrial revolution.  The machine’s simple function of separating cotton fibers from the plant’s seeds was enough to spawn an explosion of cotton production, and later the mass-scale textile industry.

This patent, signed by Samuel Morey, is one of the most important in US patent history since it holds the first description for what we’ve all become to know as an internal combustion engine. But it also has an interesting discovery story: it was not accessible to the public until 2004, when it was found along with 13 other X-patents in the Dartmouth College archives. Morey, who died in 1833 at age 71, holds the earliest patent for an internal-combustion engine, although Robert Fulton owned the patent for a steam engine that uses a paddle wheel to propel a boat, so Fulton is generally credited with the invention of the engine.

Approved in February 1836, this patent was absolutely killer – literally. This was the patent which none other than Samuel Colt filled for his now infamous revolving gun.