by Mihai Andrei
in Environment, Studies, World Problems
Reading Time: 2 mins read
A A
Share on FacebookShare on TwitterSubmit to Reddit

At nearly 200 meters below the ice, there is no light, the temperature is way below 0 degrees, and scientists were expecting to find nothing more than a handful of microbes – and for good reason. So it’s easy to understand why they were so surprised to find not a single (evolved) life form, but actually two such creatures. 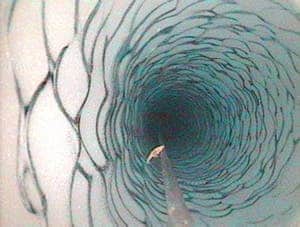 The National Aeronautics and Space Administration lowered the camera, in an attempt to look deep in the underbelly of Antarctica’s ice; not long after that, a shrimp-like creature swam by and then “landed” on the cable. Scientists also picked up a tentacle that they believe can only come from a jellyfish – a pretty big one too.

“We were operating on the presumption that nothing’s there,” said NASA ice scientist Robert Bindschadler, who will be presenting the initial findings and a video at an American Geophysical Union meeting Wednesday. “It was a shrimp you’d enjoy having on your plate. We were just gaga over it,” he said of the 3-inch-long (76-millimeter, orange critter starring in their two-minute video.

The video forces experts to rethink what they previously believed about where evolved animals can survive in extreme environments; if they can live in this freezing underwater environment, why not on Europa, the frozen moon of Jupiter, or other such places?

“This is a first for the sub-glacial environment with that level of sophistication,” Ellis-Evans said. He said there have been findings somewhat similar, showing complex life in retreating ice shelves, but nothing quite directly under the ice like this.