Anxiety treatment with a computer just as good as therapy, study says

by Tibi Puiu
in Alternative Medicine, Mind & Brain, Psychology, Studies
A A 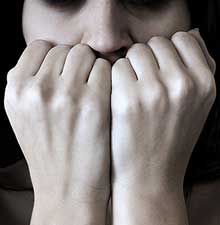 All you clinically diagnosed anxious readers might want to boot your therapist and settle for a cheaper, more comfortable alternative in the form a computer software which offers therapy through a series of highly effective tests, apparently just as effective as “the couch”.

Called Cognitive bias modification (CBM), the therapy developed by researchers at Brown University uses a software which diverts the subjects’ attention away from anxiety and helps them assess a situation in a calmer manner.

“A lot of people are skeptical, particularly people like me who are clinicians and know how hard it is to help people with anxiety and how much effort and time it takes in therapy,” says Courtney Beard, assistant professor (research) of psychiatry and human behavior at Brown University, and the study’s lead author.

“It just doesn’t seem possible that a computer program could produce similar effects. But I’m more of a scientist than a clinician so I want to see data.”

Part of the experimental phase of the treatment, researchers ran tests with 20 people who received therapy and 12 people on placebo, to combine two techniques of CBM to treat social anxiety disorder: one that seeks to enhance subjects’ control over what they pay attention to and another that trains them to interpret situations less anxiously.

Subjects were shown a split screen with two faces;  a disgusted figure and a neutral figure. Soon after, one of the faces would get replaced by a big letter, either an E or and F, and subjects were asked to report which letter was it they saw. For people experiencing the real treatment, the replaced face was always the neutral one, which encouraged them to divert their attention from the disgusted face. For placebo subjects, the face turned into a letter at random between the two possibilities.

Subjects, for example, could choose between “funny” or “embarrassing” in one case, after which the sentence “People laugh after something you said” appeared. Subjects would score correctly when choosing the benign, anxiety deflecting choice; in this case “funny”. Placebo subjects, meanwhile, saw words that had nothing to do with the situation’s social nature.

The subjects self-reported their anxiety level five times during the four-week period. Results showed the average score of those receiving the therapy dropped from more than 80 to about 60 – the lower the better.

As a further evaluation of the program’s effectiveness, researchers organized a public speaking test as well. Subjects were asked to hold an impromptu 5 minute speech before and after completing the therapy in front of a blind-folded commission. The scores showed a significant improvement in those who received the therapy, while the speaking scores of the placebo group got worse.

The results for the computer guided therapy is on par with other smaller studies whose results are comparable with the presented in this article. However, a more extensive study with larger trials on more subjects is needed to accurately judge CBM and make it a recommended treatment for anxiety.

“This certainly isn’t going to replace therapy,” she says. “I see it more as a very inexpensive, very easy to deliver, first-line intervention that could help a lot of people. For those it doesn’t help, then maybe we could devote the more expensive and time-intensive resources to them.”

Therapy by a professional and prescription drugs will likely still be the best options for more advanced cases of anxiety, however CBM might become a highly attractive options for subjects experiencing milder diagnoses. The study was  reported online in the journal Depression and Anxiety