Men are red, women are green; according to Brown scientist 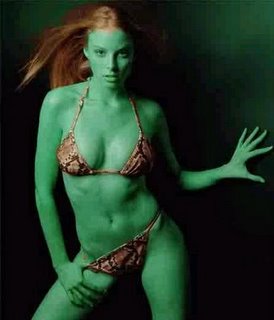 We’ve heard the phrase “men are from Mars, women are from Venus” (or what is the other way around??) a hundred times. But quickly, associate a colour with the two planets; over 90% of those asked to do this will associate red with Mars, and Green with Venus. So there could be truth behind that old saying. But Brown University scientist Michael J. Tarr relied on more than that.

Along with graduate student Adrian Nestor, he analyzed color difference in several dozens of faces. They determined that women tend to have more greenish colours, while men lean towards red. The discovery could in fact be very significative in cognitive research, as the study of face perception is already becoming more and more appreciated (in police work, makeup, etc).

“Color information is very robust and useful for telling a man from a woman,” said Tarr, the Fox Professor of Ophthalmology and Visual Sciences and professor of cognitive and linguistic sciences at Brown. “It’s a demonstration that color can be useful in visual object recognition.”

If you’re still not convinced of the importance of this study, you should probably know that observers are quite to the colour of faces when the face is blurred or hard to see.