Scientists engineer heart in the lab that beats on its own

Regenerative medicine has come a long way, and while important strides forward have been made, scientists are still toiling with ways to completely grow organs in labs. There are millions of people worldwide suffering from afflictions to organs like the liver, lungs or heart – for many of them a transplant is they’re only chance at living a normal life again and even survive. Less than 1% of those on the waiting list actually receive a transplant, however, because of the sheer disproportion between donors and patients. Elaborating means of growing new organs in the lab ready for transplant and save lives is thus imperious. Work is though and slow, but signs are we’re getting there.

The latest breakthrough comes from researchers at University of Pittsburgh who recently report they’ve cultured a heart that can beat on its own. Unlike other cultured organs like the lungs or liver (still primitive, somewhat working, but not ready for transplant), the heart is the most difficult organ to build. Why? The heart beats, and building a heart in the lab that beats isn’t enough. It needs to beat at a certain rate, something controlled by the cardiovascular system, which needs to be reproduced. So you need to build a whole new system, not just the organ itself. Onto the scientists’ work, however.

Like other regenerative efforts, the researchers used induced pluripotent stem cells to culture their heart. These cells are very similar to stem cells, only they’re collected from adult cells and forced to express certain genes. Using cells collected from blood, skin, stomach, even urine (we reported earlier how a group of researchers grew teeth-like structures using such cells), scientists can turn these into iPSCs and then morph them into whatever they like. So, basically, most of the features of stem cells (the differences between iPSCs and stem cells are still not fully understood), without the drawbacks – controversial embryonic collection, hard to come by etc. Most importantly, however, because the pluripotent stem cells are collected from mature cells – i.e. from the patient who needs the transplant – an organ grown from these will have a much slighter chance at being rejected by the host body.

“Scientists have been looking to regenerative medicine and tissue engineering approaches to find new solutions for this important problem. The ability to replace a piece of tissue damaged by a heart attack, or perhaps an entire organ, could be very helpful for these patients,” said Lei Yang, the lead researcher.

The approach Lei and his team used, however, is different in one key aspect from other iPSC-centered heart regeneration efforts. They first let the stem cells begin to develop for six days, such that some of them may differentiate into  cardiovascular progenitor cells. 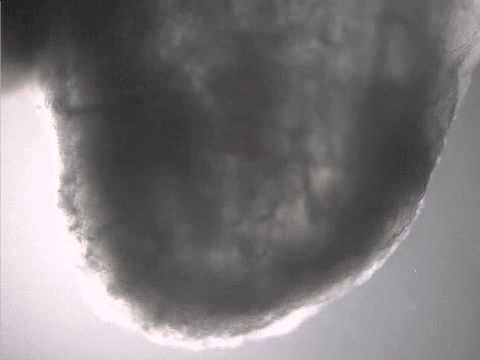 The heart of mouse was subsequently collected and had all its cells removed besides the underling structure – leaving a sort of scaffold. Onto this scaffold the cardiovascular cells developed from human induced stem cells were laid. So, contrary to previous methods where the risk of some stem cells developing into liver cells for instance is present, the Pittsburgh team’s approach rendered more functioning heart cells – the denser the heart cells are in the organ the better the chance it has of working closer to the natural thing.

“This process makes MCPs, which are precursor cells that can further differentiate into three kinds of cells the heart uses, including cardiomyocytes, endothelial cells and smooth muscle cells,” Dr. Yang explained. “Nobody has tried using these MCPs for heart regeneration before. It turns out that the heart’s extracellular matrix – the material that is the substrate of heart scaffold – can send signals to guide the MCPs into becoming the specialized cells that are needed for proper heart function.”

Finally, the heart had enough cells to power itself and beat on its own (check the embedded video in this article) – a breakthrough moment in science. It still needs a tremendous amount of refining though. For one, as states earlier, it needs to beat a certain rate, and besides the cardiovascular system which needs to be finely regenerated, you need to have a precise density of cardiovascular cells. For human transplants, there’s another challenge. You need to have scaffolds made from other human hearts.  The next move for Yang and his colleagues will be to use as a scaffolding a stripped-down heart from a human cadaver available for research.

“One of our next goals is to see if it’s feasible to make a patch of human heart muscle,” he added. “We could use patches to replace a region damaged by a heart attack. That might be easier to achieve because it won’t require as many cells as a whole human-sized organ would.”