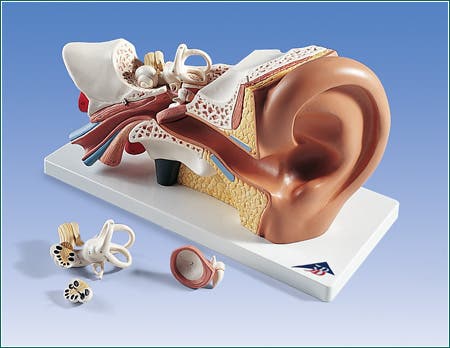 A research published earlier today in Stem Cells relates how stem cells scientists in Australia have managed to show that patients suffering from hearing disorders emerged during childhood could benefit from a stem cells procedure collected from one’s nose.

The research focused on early-onset sensorineural hearing loss, which is caused by a loss of sensory cells or neurons in the cochlea,  the part of the inner ear that holds the actual sensory organ of hearing. The condition can have genetic causes, often arising during infancy and childhood, hindering cognitive development and leading to speech and language problems.

“One of the challenges in tackling this condition is that the regenerative ability of the human cochlea is severely limited”, said lead author Dr. Sharon Oleskevich from the Hearing Research Group at The University of New South Wales. “It has been proposed that the transplantation of cells from other parts of the body could treat, prevent or even reverse hearing loss. The transplanted cells have the potential to repair tissue by replacing damaged cells and enhancing the survival of existing cells, preventing the condition from developing further.”

Research was conducted on mice that showed symptoms of hearing loss – these were injected with mucosa-derived stem cells into the cochlea of mice. Mice were chosen as they exert a similar decline in hearing after infancy, much like humans do.

“The authors have used an interesting type of adult stem cell, related to mesenchymal stem cells, to reduce the extent of hearing loss. Since the cells did not integrate into the cochlea, it is likely that the effects from the adult stem cells were due to the release of factors to preserve function of the endogenous stem cells. Mesenchymal stem cells are known to provide factors to keep many types of cells healthy and functioning,” said Jan Nolta, Associate Editor of Stem Cells.

One’s hearing capabilities is measured using an auditory brainstem response assay, which determines the lowest sound level to which the brain responds, known as the hearing threshold. After the stem cell operation, the mice with the transplanted nasal stem cells did better when compared to mice without

“The results demonstrate a significant effect of nasal stem cell transplantations for sensorineural hearing loss,” concluded Oleskevich. “These cells can be obtained easily from the nasal cavity making this transplantation a potential treatment for other human conditions including Parkinson’s disease and cardiac infarction.”