by Tibi Puiu
in Biology, Health & Medicine
A A

Researchers at  University of California, Davis have shown for the first time how whole cells and fragments orient and move in response to electrical stimuli like an electric field. Surprisingly enough, their results show that whole and fragments move in opposite directions, despite being governed by the same electric field. The findings help better our understanding of how the human body heals wounds and allow for more effective stem cell therapies.

Ever wondered how your tissue recovers so wonderfully after a wound, like a cut for instance? Tissue regenerates work by cell regrowth and transfer, in a process so fine and precise that it resembles an army of super-engineers hard at work mending a damaged skyscraper. How does the body know it’s wounded, though? Well, all the cells in our body follow an electric field and as such a flux of charged particles travel between layers of cells. When a wound occurs, this flux is disrupted just like a short-circuit. As the flux’s direction is changed, a new electric field is created which naturally leads cells into the wounded tissue. Why and how precisely this happens isn’t quite clear to researchers at the moment.

“We know that cells can respond to a weak electrical field, but we don’t know how they sense it,” said Min Zhao, professor of dermatology and ophthalmology and a researcher at UC Davis’ stem cell center, the Institute for Regenerative Cures. “If we can understand the process better, we can make wound healing and tissue regeneration more effective.”

For their research, the UC Davis scientists chose to work with cells that join together to form a fish scales structure, known as  keratocytes. These cells are common lab pets and are favored by scientists because they shed cell fragments, wrapped in a cell membrane but lacking a nucleus, major organelles, DNA or much else in the way of other structures. Both whole cells and fragments were exposed to an electric field.

To better understand how a cell acts when its stimulated by electricity, it’s better if you imagine it as  a blob of fluid and protein gel wrapped in a membrane. Cells move about by sliding and ratcheting protein fibers inside the cell past each other, advancing the leading edge of the cell while withdrawing the trailing edge. When the lab cells were exposed to the electric field, actin protein fibers collected and grew on the side of the cell facing the negative electrode (cathode), while a mix of contracting actin and myosin fibers formed toward the positive electrode (anode).

Basically, a tug of war is ensued between the two mechanisms, each striding to pull the cell towards a direction. In whole cells, it was observed that the actin mechanism won and propelled the cells towards the cathode. However, for cell fragments the myosin fibers mix won and pushed fragments towards the anode – opposite to the whole cells. It’s the first time that such basic cell fragments have been shown to orient and move in an electric field, according to Alex Mogilner, professor of mathematics and of neurobiology, physiology and behavior at UC Davis and co-senior author of the paper. 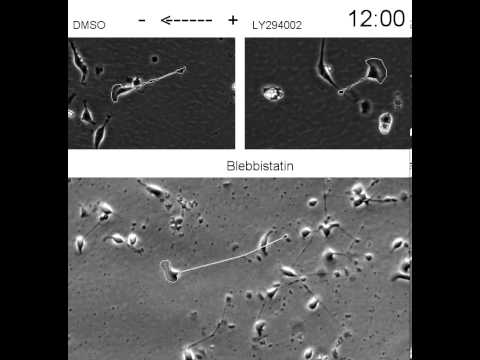 Their findings show that there are at least two mechanisms through which cells respond to electric fields, and one of these distinct pathways can work without a cell nucleus or any of the other organelles found in cells, beyond the cell membrane and proteins that make up the cytoskeleton. The most likely explanation, the researchers note, is that the electric field causes certain electrically charged proteins in the cell membrane to concentrate at the membrane edge, triggering a response.

The findings were reported in a paper published in the journal Current Biology.