by Tibi Puiu
in Health & Medicine, Inventions, Research, Science
Reading Time: 3 mins read
A A
Share on FacebookShare on TwitterSubmit to Reddit

Researchers at Yale University have successfully mange to utilize a novel MRI technique to 3-D image the insides of hard and soft solids, like bone and tissue, opening the way for a new array of applications, like previously difficult to image dense objects. 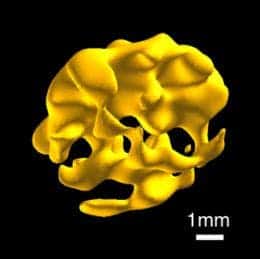 Typically, magnetic resonance imaging (MRI) can produce a 3-D image of an object by using an array of powerful magnets and bursts of radio waves which target hydrogen atoms in the respective object. These hydrogen atoms absorb the radio waves, and then emit them back, revealing their precise location. A computer then interprets these signals and “paints” a picture. It’s a very simple, yet highly productive technique, which is why MRI is so popular, especially in the medical field. However, it’s greatest disadvantage is that it needs a lot of hydrogen to read an object, and as such it only works on water-rich materials, like flesh or the human brain. Bones, very tough materials, rocks or basically almost anything that’s non-living can’t be imaged through MRI, until so far at least.

The Yale scientists have developed a new method for MRI imaging, which they call “quadratic echo MRI of solids,” that works by targeting phosphorus atoms instead of hydrogen atoms. A more complicated sequence of radio waves pulses are fired for them to interact with phosphorus, a fairly abundant element in many biological samples, allowing for high-spatial-resolution imaging.

“This study represents a critical advance because it describes a way to ‘see’ phosphorus in bone with sufficient resolution to compliment what we can determine about bone structure using x-rays,” said Insogna, a professor at Yale School of Medicine and director of the Yale Bone Center. “It opens up an entirely new approach to assessing bone quality.”

The researchers say this new type of MRI would complement traditional MRI, not supplant it. MRI of solids should also be possible with elements other than phosphorus, they say.

The researchers believe this new type of MRI imaging should be used to complement the traditional MRI already in place, and claim that MRI imaging of solids through other elements other than hydrogen or phosphorus should be possible. The quadratic echo MRI technique, however, can’t be used on living beings – for one it generates way too much heat. Immediate applications include archaeology, geology, oil drilling.