Moore’s law states that the processing power of computers doubles approximately every two years; as prices fall and manufacturing technology increases, researchers have now shown that wires just a few nanometres wide conduct electricity in the same way as their larger counterparts, rather than being affected by quantum mechanics – a result which surprised many physicists. 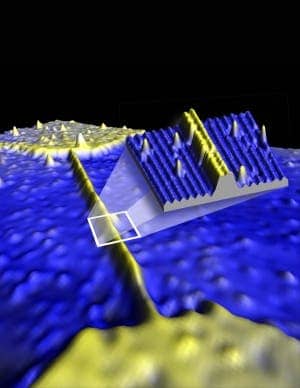 Nowadays, this is an extremely important fact, as transistors have become so small it may not be long until their performance might start to be affected by (sometimes) unpredictable quantum effects – or many scientists believe this. Resistivity, for example, a measure of how much a material opposes the flow of an electrical current through it has been shown to increase exponentially after the width of a wire goes below 10 nanometers – a feat which dramatically hinders performance in devices. So this would seem to be a pretty good stop in microchip development – at least in the traditional way.

David Ferry, an electrical engineer at Arizona State University in Tempe points out that the components from the latest computer generation go as low as 22 nanometres long, so the question is – how much lower can they go?

Well, according to a recently published study, the answer is ‘a lot’. Michelle Simmons, a physicist and director of the Centre for Quantum Computation and Communication Technology at the University of New South Wales in Sydney, Australia, and her colleagues were able to create atomic scaled wires by covering a silicon crystal with a layer of hydrogen atoms and then carving out several-nanometre-wide channels in the hydrogen using the tip of a scanning tunnelling microscope. They then absorbed phosphorous atoms onto the exposed silicone, obtaining the much needed electrons for electric flow.

The width of the wires they created varied from 1.5 to 11 nanometers, but all of them are well in the range where you would expect the ‘funny business’ to occur; however, strangely enough, they found that the wires still acted according to Ohm’s classical law, going against previous findings. According to Simmons, the belief that quantum effect would alter resistivity is incorrect, and there are two main reasons why resistivity doesn’t depend on the sample size:

“[..]a strong overlap of electron wavefunctions resulting from the high density of phosphorous atoms in the wires; and the wires are completely encapsulated in silicon, so they have no external surfaces that can inhibit the mobility and availability of electrons.”

This work has major implications for the computer industry, as Ferry states:

“Before this paper there was perhaps one more generation of microchips, whereas now there might be two or three generations,” he says. He adds that it may be possible to reduce component lengths to as small as 5 nanometres.