The age of nano-electronics: scientists develop one of the world’s smallest circuits 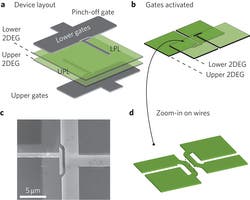 A team of researchers from led by Guillaume Gervais from McGill’s Physics Department and Mike Lilly from Sandia National Laboratories, have managed to develop one of the smallest electronic circuits in the world using nanowires spaced across each other by a distance so small, it has to be measured at an atomic level.

Miniaturization has been the dominant trend in the digital industry for years, and nano-electronics, with which scientists have been fiddling for the past 20 years, is considered as the next obvious step, allowing for even smaller and powerful electronic devices.

“People have been working on nanowires for 20 years,” says Sandia lead researcher Mike Lilly. “At first, you study such wires individually or all together, but eventually you want a systematic way of studying the integration of nanowires into nanocircuitry. That’s what’s happening now. It’s important to know how nanowires interact with each other rather than with regular wires.”

While nanowires have been studied extensively in the past, this current study is the first of its kind to approach how the wires in an electronic circuit interact with one another when packed so tightly together. The researchers used  gallium-arsenide nanowire structures which they placed one above the other, separated by only a few atomic layers of extremely pure, home-grown crystal – two wires separated by only about 150 atoms or 15 nanometers (nm).

At this extremely tiny scale, new properties and characterisctics arise, along with inherent issues in the path of the researcher’s study. For one, the nano-wires have been envisoned as a 1-D structure, very different from your usual, bulk 3-D wire common in any kind of electrical device. Through these types of wires, current can only flow in one direction, not horizontally, vertically, back/forward like in a typical 3-D capable.

“In the long run, our test device will allow us to probe how 1-D conductors are different from 2-D and 3-D conductors,” Lilly said. “They are expected to be very different, but there are relatively few experimental techniques that have been used to study the 1-D ground state.”

At the nanoscale, also, the behavior of the circuit is described by quantum physics. In our case, by the introduction of Coulomb’s drag effect. This force operates between wires, and is inversely proportional to the square of the clearance. This is why in conventional circuitry, where the gap between wires is quite visible, this drag force can be considered negligible, however at nanodistances, the force becomes large enough for it to disturb electrons. This causes the current flowing through to the nanowires to march in opposite directions.

This means that a current in one wire can produce a current in the other one that is either in the same or the opposite direction.

“The amount is very small,” said Lilly, “and we can’t measure it. What we can measure is the voltage of the other wire.”

Coulomb’s drag effect is still not very well understood at this time, however what is know is that “enough electrons get knocked along that they provide positive source at one wire end, negative at the other,” Lilly said.

Yes, nanowires will allow for a even smaller scale of the digital world, however this is just the most visible benefit, out of many which are set to revolutionize electronics in the following decades.

[RELATED] The Smallest Computer in the World

One of the biggest hassles scientists working in the field of electronics at this time is how to control dissipated heat, the energy lost to the environment. This is a great concern to computer designers especially since millions of integrated circuits are currently employed in most devices today, and the heat generated by them has to be controlled. Well-known theorist Markus Büttiker speculates that it may be possible to harness the energy lost as heat in one wire by using other wires nearby. Basically, as the distance is smaller, the heat generated will be smaller as adjacent wires can easily absorb those minute quantities.

Also, speed will be a parameter which will be improved, as smaller distances translate in shorter time for signals to travel from one point to another. In this present research, the Sandia National Laboratories experiment rendered an unexpected voltage increases of up to 25 percent.

The research was published in the journal Nature Nanotechnology.