Future devices will rewire themselves thanks to nanomaterial tech

Scientists at Northwestern University have developed a new nanomaterial of exciting properties, which will allow for the computer of the future to rewrite and rewire its circuitry, and in the process become an entirely different device.  Thus, a single device could rewire itself to become resistor, a rectifier, a diode or a transistor simply based on signals. 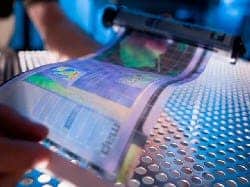 With smartphones getting smaller and smaller, the materials from which the circuits are constructed begin to lose their properties and are more likely to be controlled by quantum mechanical phenomena, according to the research team from Northwestern University in Michigan. The nanotechnology employed the researchers involved in the breakthrough has the potential for a new generation of electronics.

The nanomaterial works by steering electrical currents through a material – a mixture of different aspects of silicon and polymer-based electronics. The hybrid material is composed of electrically conductive particles, each five nanometers in width, coated with a special positively-charged chemical. These are then surrounded by a multitude of negatively charged atoms that balance out the positive charge. When an electrical charge is applied across the material, the small negative atoms can be moved and reconfigured, while the positively charged ones stay in the same position.

“Our new steering technology allows use to direct current flow through a piece of continuous material,” said Professor Bartosz Grzybowski, who led the research. “Like redirecting a river, streams of electrons can be steered in multiple directions through a block of the material; even multiple streams flowing in opposing directions at the same time.”

By changing the negative electrons movement in the compound nano-material, the levels of electrical conductance can be modulated to meet a certain purpose, like directing a certain path for electrons to move.  Simply adjusting the flow of negative electrons, one can create or erase electron paths. Using multiple types of nanoparticles allows the creation of more complex electrical components, such as diodes and transistors. Basically, you can have today’s numerous components wrapped inside a single electronic packaging, resulting in an even greater miniaturization of electronic components.

“Besides acting as three-dimensional bridges between existing technologies, the reversible nature of this new material could allow a computer to redirect and adapt its own circuitry to what is required at a specific moment in time,” said David Walker, an author of the study and a graduate student in Prof Grzybowski’s research group.