by Tibi Puiu
in Research, Robotics
Reading Time: 3 mins read
A A
Share on FacebookShare on TwitterSubmit to Reddit 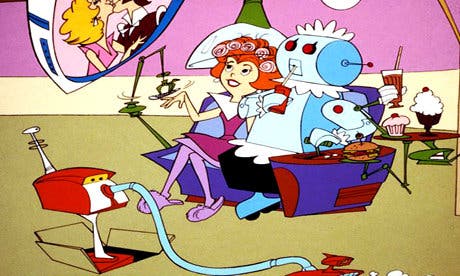 There are all kinds of robots nowadays that are here to assist humans with their daily chores, both at work and home alike. I think a lot of us have dreamed and even spoken out loudly, of course jokingly, how cool would it be to have a robot walk along side you and reach out his mechanical arms and grab stuff you need in a jiffy. I’ve always entertained the thought of a robot with Shiva-like arms extending out and helping me out with my groggy mornings: one arm brushes my teeth, another combs my hair, another irons my shirt and so on, all without me having to press a button. Fun and handy, for sure, but could something like this happen during our lifetimes?

Researchers at Cornell University recently unveiled a robot that might just be the first in this direction. What makes it special is that it can sense your intentions and by anticipating them, it quickly comes to your aid without you having to instruct him in any way, be it verbally, mechanically, whatever. For instance, you’re lying on your sofa watching a TV documentary when you suddenly feel the urge of opening up a beer can. The Cornell robot only needs a few movements to predict what you desire and is quick to pour you a cold one.

No, the robot can’t read your mind, instead via a Microsoft Kinect sensor, the robot assess your body movements, then accesses a video database of about 120 household activities, including putting food in the microwave, turning the TV on, making cereal and so on, in order to predict what your actions will be a few seconds in the future. There are a lot of robots out there, the most modern of which are even more dexterous than the Cornell robot, that can easily perform such tasks, however these are all stuck in the past, while this psychic bot has all its eyes (sensors) set on the future.

“Looking a bit into the future helps a lot,” said Ashutosh Saxena, one of the computer scientists who programmed the robot, in an interview with Wired.

Creepy? Not at all, we humans do this all the time without even realizing it. We only need a few moments to tell what the person in front of us needs based on his body language. So why not teach a robot this skill too? The innovation lies in the robot’s top notch recognition and prediction algorithm, which, wouldn’t you know it, has been made open-source, readily available on the web for any developers to play with it and design their own robots.

“Even though humans are predictable, they are only predictable part of the time,” said Saxena in a news release. “The future would be to figure out how the robot plans its actions. Right now, we are almost hard-coding the responses, but there should be a way for the robot to learn how to respond.”

This bot isn’t all about making people even more lazier. From from it. Learning what it’s capable of, researchers can then improve their design and help make robots safer for humans (there are lot of robot related accidents in factories) and increase efficiency when working with humans, like in offices or hospitals.

Check out the video below to see how the robot works.