Foambot can build new robots on the spot [VIDEO]

by Tibi Puiu
in Robotics, Science, Technology
A A 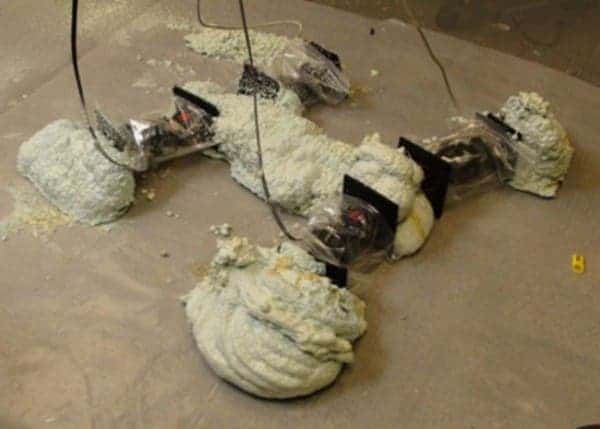 Another one from the realm of James Cameron’s movies – a robot that can build other robots. While the technology is still not exactly Skynet material, University of Pennsylvania’s Modlab foambot is an extremely interesting working concept capable of deploying itself with modular robot components, and practically assemble a new bot on the spot depending on the task it needs to perform.

A bunch of roboting parts, like actuators, are lined in a particular order depending on the type of contraption you need to assemble, after which the foambot comes along and sprays foam, which hardens and allows the new robot to come into a new moving shape. The foam is a simple commercially available material, able to expand 20 times its own size. It might not look like much, but in future variations it might prove to be indispensible for certain applications.

Almost all of today’s robots are designed for serving a particular task, however with this kind of tech, after a few tweaks to build a more practical variant, you could basically deploy bots cattering for a bunch of different situations. The foambot would definitely be very much welcomed in applications where there are numerous unpredictable environmental parameters, like space exploration or search and rescue.

Check out the self-deploying robot, developed by a team lead by Shai Revzen, in two seperate instances, one as a snake like narrow robot, the other as a quadruped bot, in the videos right below.