Robots work better with humans when you treat them like humans

Chances have it, if you’re working in the field of manufacturing, medicine, research or even sales, that some of your co-workers are robots. Which is no wonder, since robots today are a lot cheaper and efficient than most humans when simple or repetitive tasks are required, or on the contrary when high precision and delicate maneuvers are needed, unsuited for a human’s uneven hand.

As more and more environments become a sort of synergy between human workforce and robots, there’s a growing need for the two to interact better. Many studies have been made in this direction, with mixed results. Recently, scientists at MIT have found that the strengths and weaknesses of both humans and robots can be complemented a lot better when the two learn to model each other’s tasks. 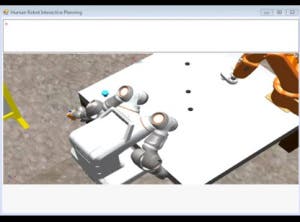 The research was inspired by a productivity model typically employed by the military called cross-training in which individuals switch jobs with one another to better understand what their jobs entail and thus work together better as a team. Julie Shah, head of the Interactive Robotics Group at MIT’s Computer Science and Artificial Intelligence Lab (CSAIL), explains why there’s a need for humans and robots to learn to work together.

“People aren’t robots, they don’t do things the same way every single time … so there is a mismatch between the way we program robots to perform tasks in exactly the same way each time and what we need them to do if they are going to work in concert with people.”

Traditionally robots are trained for a task by rewarding them when a task is completed correctly and by provide negative feedback when they fail to do so. Obviously, improving efficiency the same way for humans doesn’t work, so why treat robots differently? The MIT researchers reprogrammed existing reinforcement-learning algorithms to allow robots not only to learn from positive and negative feedback, but also from other workers, robots or humans.

For the study, humans were paired with robots in a virtual environment where a simple task needed to be completed – placing screws and screwing them in. Two rhythms were tested: either all three screws were first placed and then the robot, called Abbie, would screw in the batch, or each screw would be fastened right after it was placed.

The tasks were replicated in a real environment. For the control group part, the humans and robots were completely misaligned in terms of cooperation, like an off-match dance. The humans weren’t sure what the robot would do next after placing the screw so it would wait longer in dreaded fear of not having his had screwed in along with the bolts.

For the robots and humans that cross-trained before, though, things were a lot different. They spent 71 percent more time moving at the same moment, a sign of better coordination, akin to a well oiled machine, according to the researchers. At the same time, concurrent work time by the other teams fell 41 percent. Also the robots themselves had a much lower level of uncertainty, spending less time worrying about humans would do next.

“What we suspect, and are planning to follow up on, is that the real benefit is coming from adaptation on the human side,” said MIT professor Julie Shah, who leads the Interactive Robotics Group. “The person is doing actions in a more repeatable way, developing a better understanding of what the robot can do.”

The findings suggest that work environments could be made a lot more productive using the method described by the MIT team in their paper, while also making them a lot safer. The video below shows how the robots and humans worked together as part of the MIT research.