by Tibi Puiu
in Robotics, Technology
Reading Time: 3 mins read
A A 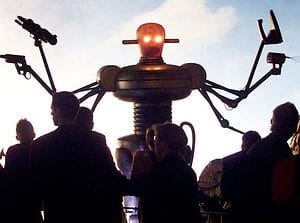 The whole point of technology is that of aiding mankind, and it has done so since the advent of fire and will continue to do for a long time. In today’s fast pacing world, however, technology is evolving so fast that it has caught the workforce by surprise. Of course, we’re primarily referring to robots, be them physical like a production line robot or virtual like a logistics software.

MIT professors Erik Brynjolfsson and Andrew McAfee recently made a guest appearance at the popular TV show 60 minutes where they outlined this problem and firmly asserted that robots are “absolutely” responsible for this unprecedented lack of jobs in 20 years, in the US at least. This despite the fact that American corporations and companies profits and margins are once again up after the great recession.

“Technology is always creating jobs, Brynjolfsson told 60 Minutes reporter Steve Kroft. “It’s always destroying jobs. But right now the pace is accelerating. It’s faster we think than ever before in history. So as a consequence, we are not creating jobs at the same pace that we need to.”

How is this different from the beginning of the rapid industrialization of the early 20 century? Then assembly lines enhanced productivity tenfold, but also left demand for workforce lowered. The US workforce eventually recovered as manual labor was repurposed.

“We are in transition,” said Gorbis. “It is similar to when we mechanized agriculture. After that we went through a period of high unemployment as people transitioned to new kinds of jobs. People learned to do other things.”

Things might be a bit different today, however. Retailers are moving to e-commerce, so there’s no need for stores and employees. Bank clerks are being replaced by ATM machine, and this could go on. Basically every job market where employees have to perform repetitive and sequential tasks is at risk. This is why careers such as new graduate nursing jobs are so highly demanded. There is no risk of robots taking over these types jobs. One might argue that before our robot overlords came to claim the US workforce came the Chinese and Indians. Ironically, the poorly paid manual workforce in eastern and southern Asia that has claimed millions of jobs in the west might be the first to receive a dreaded blow. As the standard of living is ever increasing in developing countries outsourcing manufacturing and other manual labor is becoming ever less profitable.

Foxconn for instance, a company famous for manufacturing and assembling Apple products like the iPhone and iPad, plans to implement a whooping 1 million robots in its assembly lines in the future. Meanwhile, Baxter the friendly robot, might help kick start American small manufacturing by offering cheap, but reliable means for competing with overseas cheap labor.

Still, we’re on the brink of a major social issue. Robots are far from reaching their peak, they’ve just began to surface – with this in mind can the workforce adapt fast enough and retrain itself to match the pace? Check out the fascinating 60 minutes segment with Brynjolfsson and McAfee below.