Finally, robot that can make you a sandwich is invented [with video]

Scientists from the Technical University of Munich (TUM) working at the Intelligent Autonomous Systems Group reported creating a robot that can finally make you a beverage and get you a beer.

TUM-Rosie and TUM-James, as the two robots have been called are quite special; for one, Rosie has what is called a “very high degree of cognition”, which means that it can accurately sense surrounding environments and make decisions accordingly. Practically, this means it can used its two four-fingered hands to manipulate objects such as… let’s say bread, cheese and salami – for you, lazy human.

James on the other hand has other skills, just as useful; the robot is equipped with a Kinect 3D camera sensor and several other cameras and sensors which make him good at fetching objects without dropping or crushing them and bringing them from one place to the other. If you’re thinking what I’m thinking, then yes – it works on beers too. Here’s a video portraying their special abilities. 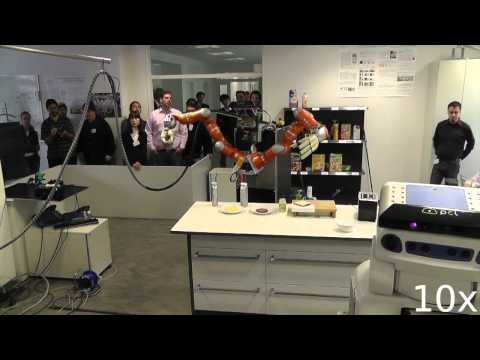