The time where we could speak about 'robots taking our jobs' at the future tense has passed.

The time where we could speak about ‘robots taking our jobs’ at the future tense has passed. Many factories around the world are already replacing their workforce with robots — and it’s working out for them. Now, a new robot called SAM might revolutionize brick-laying, but it might also leave lots of people without a job. 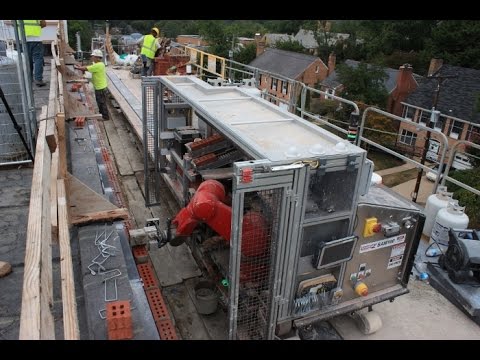 SAM, short for Semi-Automated Mason, was created by the New York-based Construction Robotics. He’s capable of laying down 3,000 bricks per day, which makes him six times faster than the average human — and it’s also cheaper. According to a report by Zero Hedge, with SAM, you’d end up at a cost of about 4.5 cents per brick. Considering a $15 per hour wage rate, plus benefits, you end up with a cost of 32 cents per brick — seven times more than with SAM. The robot also doesn’t require any breaks or sleep time, so you can basically use it round the clock, as long as there is a human supervisor around. Human assistance is still needed to load bricks and mortar into the system and to clean up excess mortar from joints and clean up the excess mortar after the bricks have been laid.

SAM has already been deployed to several construction sites in the US, and will make an entry in the UK later this year. Each SAM can be rented at a monthly cost of ~$3,300 but even so, Construction Robotics claims that the unit can reduce the cost of brick-laying by half, which means you’d be saving up a lot of money on major construction projects.

Of course, this doesn’t mean that if you’re a bricklayer you should start looking for a new job. As mentioned above, SAM still needs a supervisor, and someone to finesse its work. There are just a few SAMs to go around, and when you consider all the construction sites in the world, the impact that SAM now has is negligible. Also, this is still just the pioneering stages of such projects, but it is a telling sign of what’s to come. More and more such robots will be developed, and that’s alright — who doesn’t want the same job done better and cheaper? What isn’t alright is that a lot of people might be left without a job, and we as a society don’t have a backup plan yet. Automation is coming at us with a fury, whether we’re ready or not.