Chimps can work together similarily to humans, study shows

by Tibi Puiu
in Anthropology, Research, Science, Studies
Reading Time: 2 mins read
A A
Share on FacebookShare on TwitterSubmit to Reddit 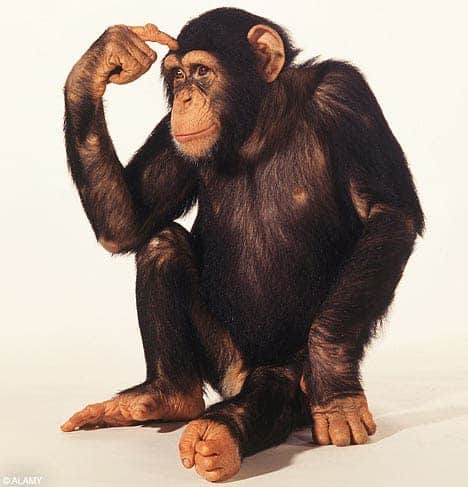 In a recent study published in the Proceedings of the National Academy of Sciences, scientists have shown that our closest relatives behave very similarly to humans when put in a situation where close cooperation is needed for maximizing results.

The research, conducted by a team of scientists from Georgia State University, was tested on three primate sub-species – humans, chimps and capuchin monkeys, and was based on a famous game theory test called The Assurance Test. Each species was grouped in pairs, and each subject had to return a token, either a “Stag” or a “Hare”. If each subjected turned in the same token as his pair, he then would receive a reward – money for humans and fruit for the non-human primates.

This is where the catch comes in though, if a “Stag-Stag” combo was turned in, then the pair would be farely more rewarded as opposed to a “Hare-Hare” combination, where are a “Stag-Hare” combination would render zero rewards. It becomes clear that the participants not only had to guess the rules of the game, but also cooperate between them.

For the sake of the study’s accuracy, humans weren’t advantaged in any way with respect to their fellow primates, such that no instructions had been given. Surprisingly, humans didn’t fare as well as researches had expected, since out of the 26 pairs of human students only 75% turned in “Stag-Stag” combos, although evidently they out-performed the other two species. Out of the twelve chimp pairs tested, none rendered the maximum pay-off combination in the end, but eight pairs turned in a winning “Stag-Hare” combination. And, also surprisingly, one of the six capuchin pairs render a “Stag-Stag” combo.

While it’s pretty funny to see Human play typical primate tests, this research can be considered extremely valuable, seeing how it can help shed new light on how our species’ family is connected and how decision making can be strikingly similar to human behavior. Looks like chimps and capuchins can be quite the strategists.