Neanderthals may have died off much earlier than thought

by Tibi Puiu
in Anthropology, Science, Studies
Reading Time: 3 mins read
A A
Share on FacebookShare on TwitterSubmit to Reddit

A new carbon dating technique developed by Australian scientists may warrant a new extinction theory for the Neanderthals, which according to the researchers made their last stand some 50,000 years ago or 15,000 years earlier than previously thought. If this is indeed a fact, then our distant extinct relatives may have never interacted with modern humans, nor interbred for that matter as other studies might suggest. 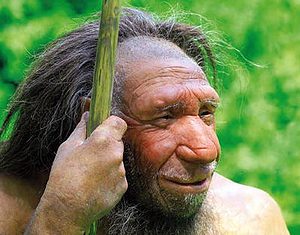 Scientists from the Australian National University (ANU), in collaboration with the Spanish National Distance Education University (UNED), used an improved dating method for “ultrafiltration,” a technique that removes modern carbon that can contaminate ancient collagen in bones and thus obstruct dating. Some 215 bones from 11 sites  in southern Iberia were studied.

Of this massive survey, only a handful of bones were deemed fit for analysis since the other lacked the necessary amount of collagen for accurate dating. Thus, most of the other sites could not offer clear radiocarbon dating except for Jarama VI and Zafarraya, where sufficient evidence was found that placed the earliest record to be about 50,000 years ago at two separate sites.

“Our results cast doubt on a hypothesis that has been broadly accepted since the early 1990s – that the last place for surviving Neanderthals was in the southern Iberian Peninsula,” researcher Rachel Wood, an archaeologist and radiocarbon specialist at Australian National University in Canberra, was quoted as saying in Latinos Post. “Much of the evidence that has supported this idea is based on a series of radiocarbon dates, which cluster at around 35,000 years ago. Our results call all of these results into question.”

One can imagine that a theory that has been in place for roughly twenty years is not easily shaken, especially since so many ramifications have been made. Many genetic studies claim that Neanderthals and modern humans interbred, but in light of these recent findings these claims might prove to be false.

“It is improbable that the last Neanderthals of central and southern Iberia would have persisted until such a late date, approximately 30,000 years ago, as we thought before the new dates appeared” assured coauthor Jesús F. Jordá, researcher of the Department of Prehistory and Archaeology at UNED.

The researchers involved in the study themselves admit, however, that this not means that Neanderthals 100% died off 35,000 years ago. The new technique needs to be applied to other sites in Spain, as well as in other Neanderthal footholds in Europe or Crimea.

If other sites turn out to be older, then it is likely that encounters between Neanderthals and humans had to have taken place much earlier than previously believed, he added.

“Evidence from Britain, Belgium, France, Germany and Italy is increasingly pointing to a modern human presence before 40,000 years ago,” said Stringer. “The new chronology suggests that any interaction between the last Neanderthals and the earliest moderns in Europe will similarly move before, rather than after, 40,000 years.”

Previously, we reported on a genetic study which analyzed Neanderthal DNA and concluded they were on the point of dying off as a race well before humans made their appearance in Western Europe. Coupled with these latest findings, things are getting a whole lot more interesting.