by Mihai Andrei
in Geology, Research
A A 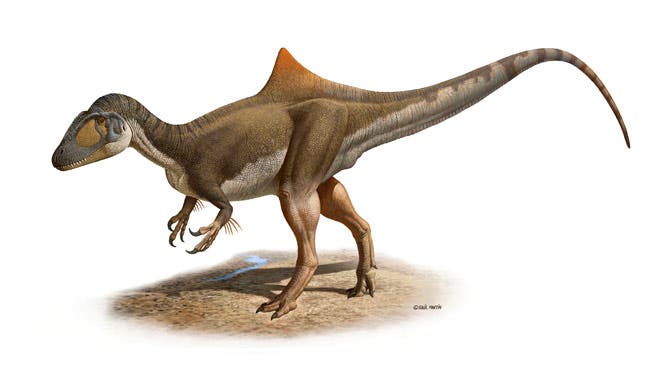 About 125 million years ago, these hunchback dinosaurs roamed today’s central Spain, measuring approximately 6 meters and feasting off of smaller animals of all sorts. However, what’s really surprising about the dinosaurs is its “hump”, a body structure never before seen in dinosaurs. A recently exposed skeletal structure revealed some unique features that has researchers raising their shoulders. The most obvious ones are of course the last two vertebrae in front of the pelvis, in the hip area that have spines that project on its back to form the hump structure.

“Wow,” Jack L. Conrad, a vertebrate paleontologist at the American Museum of Natural History in New York, said of the Spanish discovery. “Overall it’s such a bizarre animal.”

Paleontoloigsts can only emit guesses about it’s purpose and functions so far.

“Probably the most plausible role for this structure is that of a deposit of fat, as occurs in some modern mammal such as in the zebu,” said Francisco Ortega of the Universidad Nacional de Educacíon a Distancia, in Madrid.

Still, this theory is not quite satisfying, because unlike mammals, the dinosaur hump has an internal bony structure.

“A structure as striking as that presented by Concavenator could play a role also in communication between individuals of the same species,” Ortega told LiveScience.

He also suggests the hump might have an ornamental design, its sole purpose being to attract mates. Another interesting thing was the little scars on the forearm, that may indicate the presence of wing feathers.

“The scars on the bone look, from what I can tell, exactly like the scars left on an arm bone of a chicken or some other modern bird, and in general those are for large wing feathers,” Conrad said during a telephone interview.

If they are indeed feathers, which has not been proven yet but seems quite possible, it could be extremely interesting for the whole paleontology field, forcing scientists to rethink some of the older theories.

“If this animal had wings, that would really push back the origin of wings, and it would basically really lock in that wings didn’t appear for flight first; more likely they appeared for display,” Conrad said.