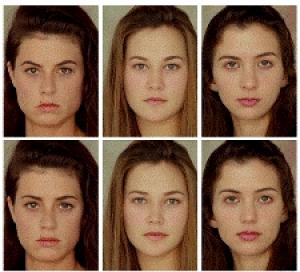 Beauty lies in the eye of the beholder, or at least that’s what we used to hear as kids from our parents. Well, scientists say our parents were wrong; after creating a computer that recognizes attractivenes in women , now they managed to create the world’s first beauty machine. While this machine can’t (yet) make you a knockout, it can make a picture of you be way more beautiful.

Researchers at Tel Aviv University invented this machine that turns pictures of average people into something that could twist the mind of many. Despite the fact that currently it works just in digital format, as it is developed it could guide plastic surgeons and even become a feature incorporated in cameras.

“Beauty, contrary to what most people think, is not simply in the eye of the beholder,” says lead researcher Prof. Daniel Cohen-Or of the Blavatnik School of Computer Sciences at Tel Aviv University. With the aid of computers, attractiveness can be objectified and boiled down to a function of mathematical distances or ratios, he says. This function is the basis for his beauty machine.

“We’ve run the faces of people like Brigitte Bardot and Woody Allen through the machine and most people are very unhappy with the results,” he admits. “But in unfamiliar faces, most would agree the output is better.” Prof. Cohen-Or now plans on developing the beauty machine further — to add the third dimension of depth.