by Mihai Andrei
in Inventions, Physics, Studies, Technology
Reading Time: 2 mins read
A A
Share on FacebookShare on TwitterSubmit to Reddit 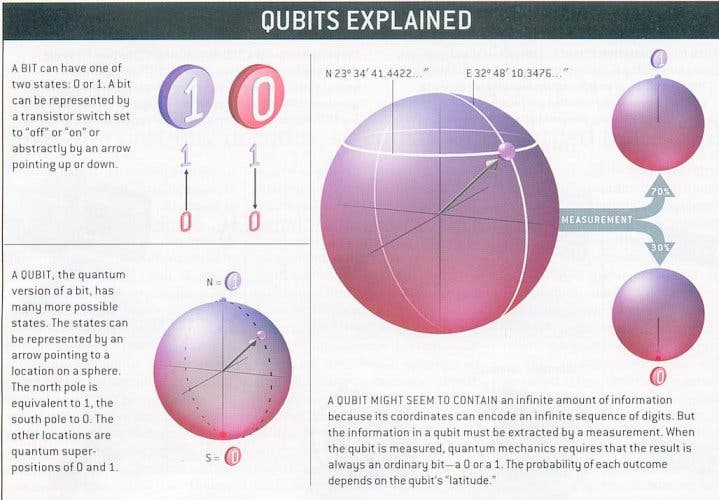 Physicists from NIST (National Institute of Standards and Technology) have demonstrated what they claim to be the first universal programmable quantum information processor that will be able to run any program allowed by quantum mechanics (the set of principles that describe the atomic and subatomic matter). They managed to accomplish this using two quantum bits (qubits) of information.

This processor could prove to be a major breakthrough for a future quantum computer, that could very well be the ‘evolutionary leap’ in the computers’ life thus resulting the possible solve of problems that are untouchable today. The discovery was presented in the latest edition of Nature Physics and this marks the first time anybody has moved beyond asking a single task from a quantum computer.

“This is the first time anyone has demonstrated a programmable quantum processor for more than one qubit,” says NIST postdoctoral researcher David Hanneke, first author of the paper. “It’s a step toward the big goal of doing calculations with lots and lots of qubits. The idea is you’d have lots of these processors, and you’d link them together.”

The processor basically stores binary information in just two beryllium ions held in an electromagnetic ‘trap’, and then handled with ultraviolet lasers. With these in hand, the NIST team managed to perform 160 different processing routines using just the two qubits. Although practically there is an infinite number of programs you can perform with the two qubits, the 160 are pretty much totally relevant, and they prove that the processor is “universal”, Hanneke says.

Of course there will be many more qubits and logic operations to solve bigger problems, but when you come to think about it, all this was done with just two atoms, basically; and the operations they performed were no easy task. Each program consisted of 31 logic operations, 15 of which were varied during programming.