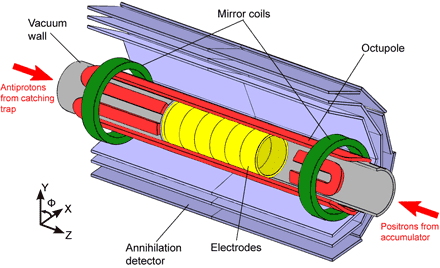 For physicists, antimatter is probably the most valuable substance ever; the slightest bit of it could provide extremely valuable information that can help clear out some of the most stressing issues in modern physics. However, the thing is these little gifts are pretty hard to wrap. However, the ALPHA project at CERN achieved this remarkable feat and took a huge leap towards understanding one of the questions about the Universe: what’s the actual difference between matter and antimatter.

The team had 38 successful attempts to capture single antihydrogen atoms in a magnetic field for about 170 miliseconds.

“We’re ecstatic. This is five years of hard work,” says Jeffrey Hangst, spokesman for the ALPHA collaboration at CERN.

And they should be ! Since it restarted working, the Large Hadron Collider at CERN had quite a few good moments, but this is the best one so far. Antimatter (or the lakc of it) still poses one of the biggest mysteries ever; according to the theories up to date, at the Big Bang, matter and antimatter were produced in equal amounts, but somehow all the antimatter dissappeared, so now researchers are forced to turn to more and more advanced and delicate methods in order to find it and study it.

As you can guess by its name, antimatter is just like matter, only in reverse. So the antiprotons are just like normal protons, but they are negatively charged, while electrons have a positive charge. The main objective of this stage of the ALPHA project was to compare the relative energy of hydrogen and antihydrogen in order to confirm that antimatter and matter have the same electromagnetic properties, which is a key feature of the standard model.

This is not the first time antimatter was captured, the first time it was in 2002, with the ATHENA project; however, it lasted just several miliseconds, which made it impossible to analyze. What happens is that when you combine matter with antimatter, they vanish with a big boom, releasing high energy photons (gamma rays). In the ATHENA project, antihydrogen combined with hydrogen from the walls of the contained and annihilated each other.

To prevent this from happening, the ALPHA team used a totally different technique, which was way more difficult: capturing the antimatter in a magnetic trap. To capture the 38 atoms, they had to repeat the experiment no less than 335 times.

“This was ten thousand times more difficult” than creating untrapped antihydrogen atoms, says Hangst — ATHENA made an estimated 50,000 of them in one go in 2002. To do spectroscopic measurements, Surko estimates that up to 100 antihydrogen atoms may need to be trapped at once.

“The goal is to study antihydrogen and you can’t do it without trapping it,” says Cliff Surko, an antimatter researcher at the University of California, San Diego. “This is really a big deal.”

Of course, achieving these atoms was very costly, but the effort was definitely worth it. However, physicists are looking into other methods that could prove to be more effective in times to come.

“Rather than trying to demonstrate that we can confine 38 antihydrogen atoms for a small fraction of a second, we are working on new methods to produce and trap much larger numbers of colder atoms,” says Gerald Gabrielse, ATRAP’s spokesman. “We shall see which approach is more fruitful.”