Planet Earth got hold of a new companion, and it’s here to stay

Not much bigger than an apartment building, 2016 HO3 has been confirmed as Earth's newest satellite.

by Alexandru Micu
in Astronomy, Discoveries, News, Research, Science, Space, Videos
A A

Not content with having just one Moon to hang with all the time, our planet has snatched a smaller asteroid into its gravitational pull. Dubbed 2016 HO3, the asteroid is about the size of a building and has an irregular orbit around Earth.

Researchers first picked up on 2016 HO3 on the 27th of April using the Pan-STARRS 1 asteroid survey telescope on mount Haleakala, Hawaii. The telescope was funded by the awesomely titles “Planetary Defence Coordination Office,” a division of NASA tasked with tracking near-Earth objects.

The asteroid measures in at around 120 feet (36.5 meters) across and just shy of 300 feet (91 meters) wide. NASA reports that it is currently locked in an irregular orbit around Earth, in between 38 and 100 times the distance of the Moon. The asteroid also transits up and down our planet’s orbital plane. It’s likely been orbiting our planet for about a century now and will keep on orbiting for many more.

Being so far away from our planet it prevents HO3 from being classified as a full-blown moon:

“Since 2016 HO3 loops around our planet, but never ventures very far away as we both go around the sun, we refer to it as a quasi-satellite of Earth,” said Paul Chodas, manager of NASA’s Center for Near-Earth Object (NEO) Studies at the Jet Propulsion Laboratory in Pasadena, California.

“One other asteroid — 2003 YN107 — followed a similar orbital pattern for a while over 10 years ago, but it has since departed our vicinity. This new asteroid is much more locked onto us. Our calculations indicate 2016 HO3 has been a stable quasi-satellite of Earth for almost a century, and it will continue to follow this pattern as Earth’s companion for centuries to come.”

To give you a better idea of how it orbits relative to Earth, NASA put together this video: 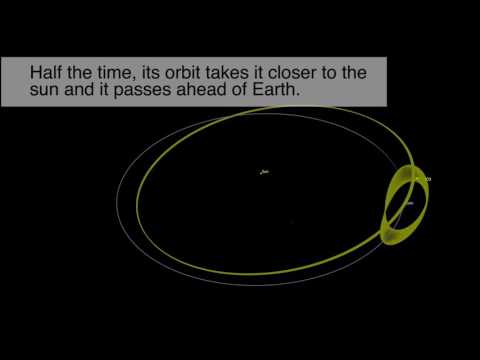