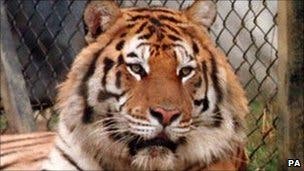 This is one of the most disgusting things I’ve come across lately, and it shows just how much lack of responsibility and sheer ignorance people can have. A bengal tiger from the Turkish capital of Ankara killed a lion that was in a cage next to him, after finding a gap in the fence separating the two cages.

It was reported that the tiger did not break the fence, but rather just found a hole in it and walked through it to the lion’s cage. It killed the lion with a single stroke to the jugular, leaving it hopelessly dying in a pool of blood.

How careless can you get ? I mean, a tiger isn’t going to pass through a small hole in the fence, right ? A bengal tiger is big, and it needs a lot of space to pass through; and this kind of hole, if it wasn’t caused by the tiger can’t just appear overnight. This whole thing reeks of carelessness if you ask me, and it disgusts me to see such things happening, in a country that claims to be civilized.

Hey, but we can rest assured: the zoo officials claim that it is all safe now, and it is safe for visiting again – including the six tigers and remaining two lions. Well done lads, well done.