Lion Tamer is attacked during Circus act – all caught on video

by Mihai Andrei
in Other
Reading Time: 3 mins read
A A
Share on FacebookShare on TwitterSubmit to Reddit
ADVERTISEMENT
ADVERTISEMENT

This is perhaps not the right attitude and I’m sure people will frown, but I have to say I had very mixed feelings when watching the video. An Ukrainian lion tamer, Oleksie Pinko was brutally attacked by two lions during a representation, and it was all caught on tape by tourists. But there are some things that have to be said. 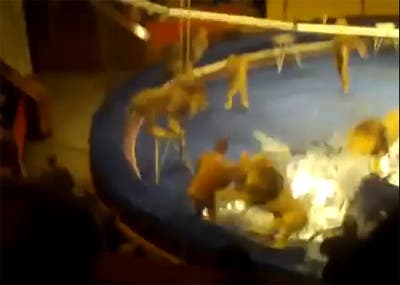 First of all, notice that when the video is beginning, you can obviously see him limping visibly, and it’s quite likely he has been attacked before the footage started. He doesn’t give up though and keeps poking the lions. Second, and most important of all in my opinion, notice that they don’t show any hostility at all towards anybody else. Nothing, nada. They point all their anger towards the lion tamer; why is this, you may ask ? It’s extremely easy to guess.

Animal taming is synonymous with extreme violence and starvation. No matter what the circus claims, no matter what they say, animal taming is all about violence. For the animals, the only life they have ahead of them is filled with constant and excruciating pain. The cute monkeys, the donkey that kisses the tamer and all that ? Yeah, they do it because of fear; rewind back to the lions.

The act itself is extremely rare, and as you can imagine, everybody in the room was really really scared, kids swearing they’ll never go to the circus again (which is not a bad thing at all).

“Kids are screaming, and kids are only 10ft away, and (my family was) probably 35ft away,” said Doug Sheperd a US tourist who provided the video below. “You have a handler from outside poking through the net, and then there’s one inside who almost gets eaten. But the lions are after the trainer.”

Mister Pinko is in the hospital, but his state is stable and he’ll get by with just a few scars. There will probably be an investigation and all that, I’ll keep you posted if any updates appear. About my mixed feelings… I’m sorry, I just can’t feel sorry for the man – I just can’t ! But saying he got what he deserves is just … a bit to harsh… probably. Only thing I can say is: never go to an animal circus, especially if you love animals ! You’ll be doing them a whole lot of good.