We didn't even think it was possible to find one up to now.

by Alexandru Micu
in Fossil Friday, News
Reading Time: 3 mins read
A A

An inconspicuous brown pebble found on a beach near Bexhill, Sussex could very well be the first piece of fossilized dinosaur brain tissue we’re ever found.

Found in 2004 by an amateur fossil hunter, the rock is a brain cavity cast of an Iguanadon-type dinosaur. While similar fossils have been found before, there’s something that makes this finding unique. A thin layer on its surface appears to be mineralised dinosaur brain tissue — the first time fossilized brain tissue has ever been found for land vertebrates.

“The most striking thing is that something as delicate as brain tissue, and which you wouldn’t expect to ever see, has been preserved,” said paper co-author Alex Liu.

“It just speaks volumes [about] the spectacular preservational quality that can be obtained in the fossil record even 130 million years after this dinosaur is alive.”

Iguanodons were large herbivores which lived 125 million years ago. They could grow up to 8 meters (26.3 feet) long, walk on either two legs or all four, and had fearsome sharp spikes on their thumbs. The cast fossil was discovered near other dinosaur remains, including rib sets and leg bones. It measures roughly 10 by 5 cm (4 by 2 inches), and the team believes it’s about one third the size of the animal’s brain cavity.

Finding the fossil so close to the bones suggest it belonged to an Iguanadon relative, but pinning it on a species has proved a bit tricky. The age of rocks where the cast was found, at 133 million years old, is several million years earlier than the known appearance of Iguanodon, said Liu.

“We can’t say it is from the same organism, but it is from a fairly large dinosaur,” said Liu.

Still, using x-ray investigation techniques, the team produced a virtual 3D model of the fossil to explore its structure and formation. They believe the dinosaur probably toppled into a lake or swamp, with the head coming to rest upside down. In the oxygen-poor, acidic environment, part of the brain was quickly mineralized while the rest decayed, The skull cavity was then filled with sediment, bone fragments and other material. 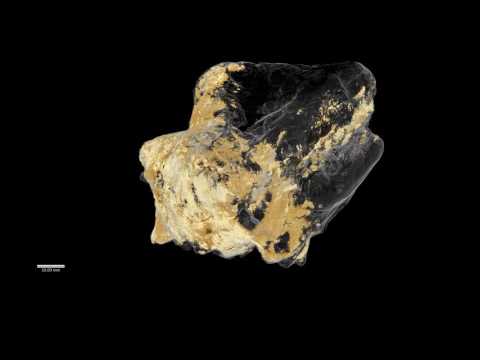 Using a technique known as scanning tunneling microscopy, they analyzed the layer of mineralized tissue on the fossil’s surface. They found “very detailed bundles” of assumed collagenous fibers, which are usual in the protective tissues around the brain. Throughout these bundles, there were open tubes that “branch and run around the edges of the specimen”, most likely capillary blood vessels.  According to Liu, the discovery finally offers some hard facts on what dinosaur brains might have looked like.

“Previously, anything we have known about dinosaur brains has had to be inferred from either comparison with what we think are modern relatives – so reptiles and birds – or just guessed from the shape of the structure on the impression of the brain on the brain case itself,” he said.

Up to now, we’ve been relying on observations performed on modern reptiles, the authors write. which have led to some wrong assumptions about dinosaurs. For example, we’ve assumed that they had brains surrounded by a thick membrane, with the actual “brain” part taking up just half of the available space. But the authors note their analysis only reveals a millimeter-thick layer of protective tissue covering what resembles brain underneath.

“That would suggest that the brain of the dinosaur did fill most of the volume of that brain case and therefore it might have had a larger brain that we previously gave it credit for,” said Liu.

The authors note however that it’s possible the features are a result of the upside down burial of the skull — which would have pushed the brain against the skull.

The paper will now undoubtedly come under a lot of scrutiny from the paleontological society. For starters, up to now, we’ve believed that brains simply couldn’t fossilize. But should the paper successfully pass peer review, it will constitute a breakthrough of our understanding of dinosaur and bird brain evolution.

The full paper “Remarkable preservation of brain tissues in an Early Cretaceous iguanodontian dinosaur” has been published by the Geological Society, London, Special Publications.