by Mihai Andrei
in Anthropology, Geology
Reading Time: 2 mins read
A A
Share on FacebookShare on TwitterSubmit to Reddit

A fresh look at some already known fossilized remains revealed quite a surprise: they turned out to be the earliest people in Europe. 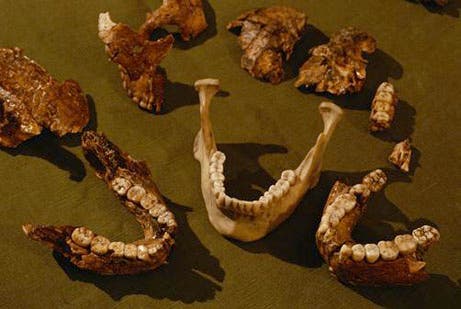 From analyzing stone tools and other such artifacts, researchers have long believed the earliest Homo Sapiens to settle on the continent some 42-44.000 years ago; the only problem is, there were no human fossils to confirm this date.

However, two different studies published online Wednesday in the journal Nature stepped in to fill the gap. Two teams analyzed the remains found and dated them, confirming the theoretized date.

In order to check the age, researchers did radiocarbon dating of shell bead ornaments from the an Italian site because the teeth were too small to directly analyze – this method suggested an age of about 43-45.000 years, making them the oldest known Homo Sapiens remains ever to be found in Europe.

Furthermore, a separate team led by Thomas Higham of Oxford University re-examined a piece of jawbone unearthed from a prehistoric cave in England in 1927, and it too turned out to be over 43.000 years old.

This earlier time frame means modern humans in Europe co-existed for several thousand years with Neanderthals, stocky hunters that became extinct around 30,000 years ago. The studies do not address whether the two species socialized, but recent genome work found interbreeding between Neanderthals and modern humans in the Middle East.