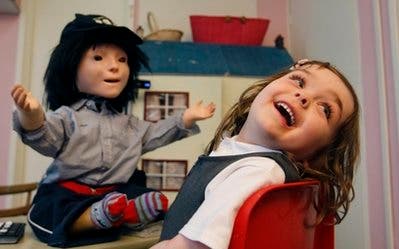 Pictured on the left is Eden Sawczenko, an autistic four year girl from Stevenage, that has had a lot of problems bonding with other children, not being able to understand emotions and actually frawining upon them. Her best friend in the world is Kaspar, a very friendly human-like, child-sized robot built by scientists from University of Hertfordshire specifically to help autistic children try to lead a normal life.

The robot is brought to the pre-school for autistic children in Stevenage once a week, when children can play with Kaspar for about 10 minutes each, alongside a scientist who remotely controls the robot.

“She’s a lot more affectionate with her friends now and will even initiate the embrace,” said Claire Sawczenko, Eden’s mother.

Kaspar is quite adorable actually. If you look closely, the robot seems quite lovable with those shaggy locks, silly baseball cap and stripped red socks. The eyes…. well ok, those freak me out too.

“Children with autism don’t react well to people because they don’t understand facial expressions,” said Ben Robins, a senior research fellow in computer science at the University of Hertfordshire who specializes in working with autistic children.

“Robots are much safer for them because there’s less for them to interpret and they are very predictable.”

The robot is programmed to interact with children in all sort of manners, like smiling, frowning, laughing, blinking or waving his arms. Kaspar only a handful of tricks, like saying “Hello, my name is Kaspar. Let’s play together,” laughing when his sides or feet are touched, raising his arms up and down, or hiding his face with his hands and crying out “Ouch. This hurts,” when he’s slapped too hard. But with all of these in mind, he’s considered the most advanced model in the world as far as similar autism-related projects from US, Canada or Japan are concerned.

The first model was introduced in 2005, while the most recent one is covered in silicon silicone patches that feel like skin to help children become more comfortable with touching people and can play Nintendo Wii with the children. So far, 300 autistic children have had the chance to meet and play with Kaspar, and researchers hope that the US$2,118 cost of development could be lowered to just a few hundred dollars if mass production of the robot might turn some day into reality.

Although no tangible data regarding the children’s progress is available, experts are very interested in confident in Kaspar’s ability to help autististic children improve their social skills and teach them basic emotions. Nevertheless, it’s enough to hear out Eden’s mother talk about her daugther’s progress to understand that no scientific statistics or polls are necessary.

“Before, Eden would make a smiley face no matter what emotion you asked her to show,” she said. “But now she is starting to put the right emotion with the right face. That’s really nice to see.”