How would you respond to being touched by a robotic nurse ?

To be touched by a careful nurse, and to feel taken care of is very important, and often neglected; having that sense of comfort and tranquility might just be what gives that extra boost to the patient. Touching patients can lead to a numerous of responses, from calmness to discomfort, from intimacy to even aggression. But how would people react to if they were touched by a robot ? Now that’s an even more sensitive issue. Would they dislike it, or take it in stride ? According to a new study done by the Georgia Institute of Technology, people generally have a positive response towards the robot, but it all depends on what they think its intention is.

“What we found was that how people perceived the intent of the robot was really important to how they responded. So, even though the robot touched people in the same way, if people thought the robot was doing that to clean them, versus doing that to comfort them, it made a significant difference in the way they responded and whether they found that contact favorable or not,” said Charlie Kemp, assistant professor in the Wallace H. Coulter Department of Biomedical Engineering at Georgia Tech and Emory University. 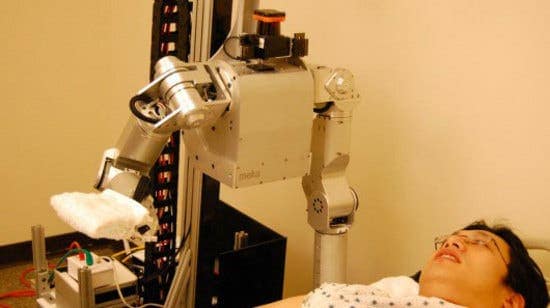 “There have been studies of nurses and they’ve looked at how people respond to physical contact with nurses,” said Kemp, who is also an adjunct professor in Georgia Tech’s College of Computing. “And they found that, in general, if people interpreted the touch of the nurse as being instrumental, as being important to the task, then people were OK with it. But if people interpreted the touch as being to provide comfort … people were not so comfortable with that

The study also had another goal, and so it tested whether the people responded more favorably when the robot indicated that it was going to touch them, versus touching them without saying anything. The results were a little surprising, indicating that people like it better when they were touched without warning.

“The results suggest that people preferred when the robot did not actually give them the warning,” said Tiffany Chen, doctoral student at Georgia Tech. “We think this might be because they were startled when the robot started speaking, but the results are generally inconclusive.”

With the ever developing robot industry, it’s obvious by now that numerous tasks that are to be performed by robots require touching humans, so their response to this touch is extremely important, especially in healthcare. The results seem to indicate that people aren’t really that scared of robots, and don’t necessarily dislike being aided by them, but there’s still a long bridge to pass before we can say that robot nurses, even if perfectly capable, can start taking care of people.